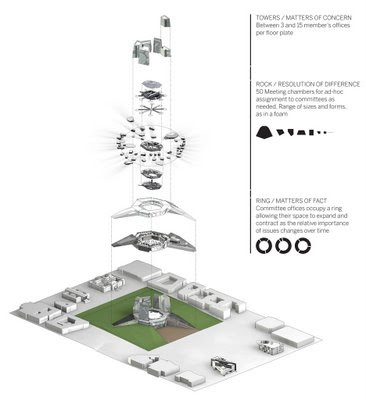 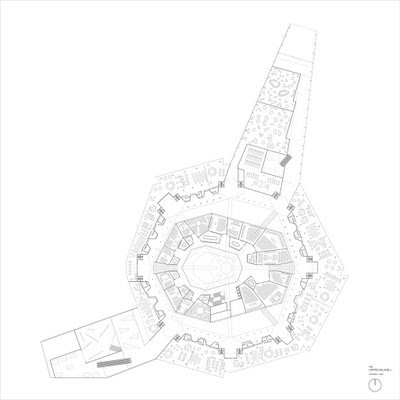 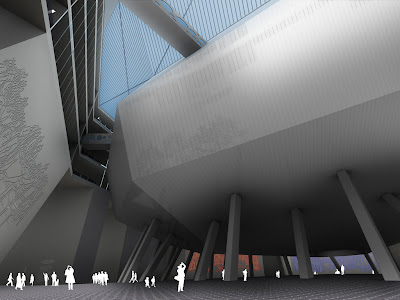 Above is a series of images from Bryan Boyer, who recently completed an MA in Architecture at the Harvard Graduate School of Design. Here's Boyer's task, as described by him at the blog he maintained while the project was on foot:

[T]he design project I've chosen for myself is to redesign the US Capitol building.
...
The short version of the pitch is that the Congress is broken... [yet however] much we dislike the current administration, they're playing by the rules of the game, more or less.

In the course of my research I discovered an interesting coincidence in the history of the US House of Representatives. Intended to grow with each uptick of the census and maintain something of a parity with the population, the House of Representatives actually stopped growing in 1911. The date has no significance, but it's interesting to note that 435 is about as many people as can comfortably fit into the chamber of the house as it stands today (the current chamber was first occupied in 1858 with 262 desks). In other words, the House's membership stopped growing because of architecture, not politics. By interfering with the political process of the country, in 1911 the US Capitol changed from monument to memorial.

The real issue is what architectural questions we can address with the Capitol as our vehicle. The primary issue at stake here is how one may develop a sense of monumentality without fixity. Perfect static environments, little capsules of space preserved for future generations, are memorials that purposefully mark a certain moment in time.

Here Boyer confronts, directly and quite literally, the insight captured in Mitch Kapor's memorable aphorism "Architecture is politics". What he says also opens up some other fascinating lines of inquiry. For me, an important one is the ambitious but, as his argument implies, necessary program of redesigning the political system itself, not just its edifices. A fully-fledged political design discourse is especially needed for moving beyond well-entrenched but misguided assumptions, such as the idea that an increasing number of representatives requires more co-located space. (e.g., What about electronically-enabled direct democracy; a virtual forum?) Indeed, (re)designing political systems themselves is the task that Dator has assigned to generations of students, including me, in the futures studies program at the Dept of Political Science, UH-Manoa. (This semester he's co-teaching a seminar which brings architecture and politics students together to synthesise their disciplinary perspectives, but in relation to the institution of the University, rather than Congress.)

Still, I digress; the main point I want to discuss isn't about the project's topic per se, but what Boyer goes on to do with it.

In addition to the elevation plans, exploded views and interior mockups shown above (and there are more where those came from, as well as a nifty animation), Boyer produced photo-illustrations of the new Capitol in its Washington, D.C. location. These boldly reimagine the famous view from Pennsylvania Avenue... 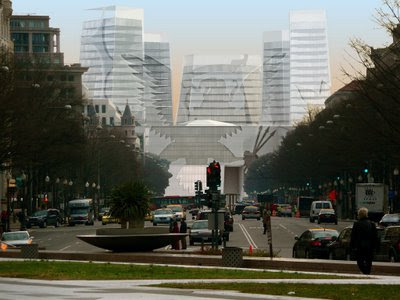 ...and from the Lincoln Memorial, looking down the National Mall: 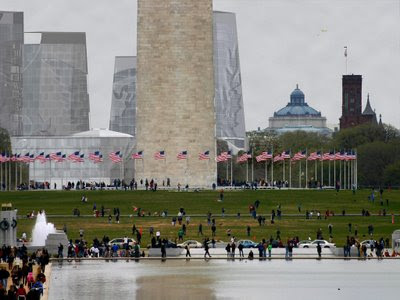 The iconicity of the target makes this a pretty audacious student project. Even so, this is all pretty standard architectural fare so far -- designs and artists' impressions of the structure-to-be.

But then it gets really interesting. Boyer offers a hypothetical back-seat passenger view of the Capitol out the windshield of a vehicle on New Jersey Avenue NW... 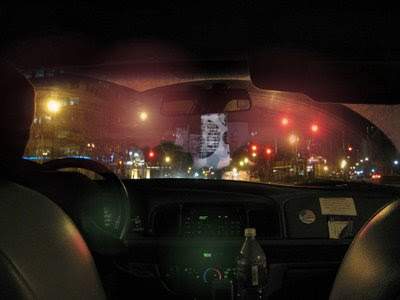 ...which (although maybe a bit cryptic out of context) to me has the ring of a photographic artifact from the future.

Yet there's more. He also produced a series of souvenir plates adorned with the proposed building's imagery...

(below, a more detailed shot of one of the plate designs) 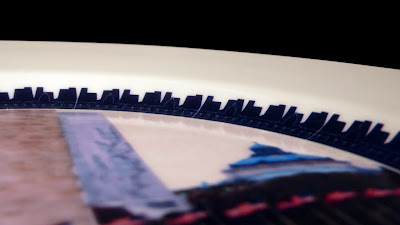 Not only is this an ingenious riff on the current bill design, it's close to "guerrilla futures" gold. 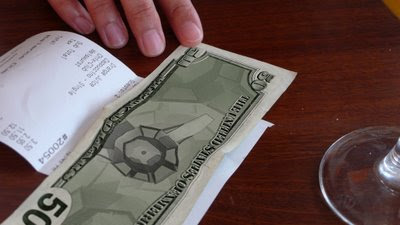 OK. A few more points and we'll be done.

Generally, I don't post much on architecture at this blog. That's partly because I feel somewhat out of my depth talking about it. (A perhaps unkind but difficult-to-deny rejoinder could be that my boundless ignorance doesn't seem to dent my willingness to write about anything else; and duly chastened on that point by my internal critic, I've searched for a more compelling reason why future buildings don't make a more steady stream of appearances here at t.s.f.) I'm sure it has something to do with volume, as in, there are so many public-park or building-and-skyline visualisations that I couldn't hope to keep up. And the other side of that coin is banality. Most of the time, I find, architects' renderings of buildings-to-be isolated, visually sterile and uninteresting, in much the same way (as noted here previously) that the minimalist backdrops of concept designs in the gadget world usually say nothing of interest about the social context for those gadgets. They don't therefore do much to help us imagine tomorrow any more wisely, but bypass or occlude the most interesting questions about the various forms that the future they purport to show could take.

Now, Boyer's strategy doesn't precisely address that type of (what we might call) scenaric context-anemia, and since his focus lies elsewhere, I don't mean to fault him for it; I'm just observing that we can't deduce much about how, if at all, the political system might be different from today's in the vision set forth. He has, however, hit on a few extremely interesting ways to convey his building design, and more importantly, its iconic intent. Ironically, it's not by the "direct" schematic and traditional design representations of the building that we get a feel for it. Instead, it's through the mediation of the new Capitol building's role as a cultural force -- one iconically reproduced on currency, commemorated in tacky souvenirs, and glimpsed through grubby windows from the backseats of cars -- that the presence of his future makes itself felt. In cinema and television, the artifacts of documentary (jerky camerawork, imperfect vantage points, bad sound fidelity) can sometimes lend a more nuanced and lifelike texture to the story than squeaky-clean realist cinema, with the camera always positioned just-so. Boyer has found his way to a sort of architectural equivalent of documentary, and I think it works.

[The project] seems well-considered and suitably imposing - but the killer part is not the building I think.

For me it’s the almost science-fictional level of world-building touches around his project of new currency featuring the building, folk art and even commemorative plates.

Puts you in mind of Paul Verhoven’s ad breaks in RoboCop and Starship Troopers in terms of really convincing peripheral visions of a world.

It puts you in a future-fictional America where something or someone has caused and completed a reboot of the Union’s sacred symbols.

It seems that Boyer knows he's doing it, too. Buried in his project blog, not apparently in reference to these specific artifacts, is a meditation on time travel (emphasis added):

The time traveler, as an individual in a new land, must both confront material differences and be curious about the mental framework (consciousness, subjectivity, design intentions) that put this material into that world.

Nostalgia is passive, time travel is active. Hijacking an object or aesthetic from another time is to rip it out of context. Fair enough. Time travel, however, as a mode of working requires that you move people (and their ideas) into a new time and then force them to adapt to their new setting. This is an active process that must evolve as a conversation between then and now. Time travel uses primary sources and thus tends towards literalness instead of abstraction.

A future-facing analog to history's "primary sources" is an idea I feel like I've been hovering around (in relation to future artifacts) for some time. I'm relieved to have found it, along with Boyer's work around these ideas, and look forward to hearing more about what may be going on in architecture that taps the same vein.

Related posts:
> FoundFutures (ongoing project thread)
> The value of hypothetical currency
> London after the rain
> Put on a happy face
> Why the language of design must enter law and politics

(via Magical Nihilism | all images from bryanboyer's Flickr photostream)
Posted by Stuart Candy at 3:31 am

dystopia now has a home. congrats.