The currency of Burmese dissent

Today, one of the most politically pointed uses of "future artifact" design that I've seen. 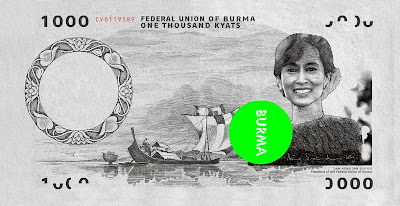 Since 01962, the largest country in mainland Southeast Asia has been ruled by a military junta. What was the Union of Burma after independence from Britain in 01948 has since 01989 been known as the Union of Myanmar, at that junta's behest (leading to frequent confusion over the name).

Aung San Suu Kyi, pictured above, is known internationally as a pro-democracy figure and advocate of non-violent resistance in Burma. She leads a party called the National League for Democracy, which she cofounded in 01988, and was elected Prime Minister in 01990. However, the junta refused to hand over power, and Dr Suu Kyi has been held under house arrest for 12 of the 18 years since then. 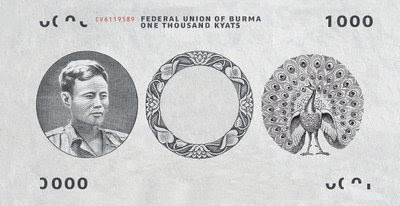 These designs for a hypothetical future 1000 kyat note (kyat is pronounced "chat") were produced in 02007 by Stockholm-based design firm Alphabetical Order. Owner and senior designer Marcus Linnér explained the project to me via email:

When our friend Martin approached us with his idea about a folder for the Burmese cause (he was at that time engaged in a student organization dealing with the situation in Burma), we took the opportunity to make use of one idea we’ve had for a long time; using the graphic language of bank-notes in a graphic design project.

The Burmese matter is of course heavily associated with the faith of Aung San Suu Kyi and she has become the very symbol of the struggle. Therefore, the idea of putting her on the cover came to us quite naturally. We also liked the provocative side to crowning her as the ruler of the country, and having her father Aung San, the founder of the Union of Burma and also an important symbol for the people on the reverse side of the bill. The peacock also featured on that side is by the way a symbol of hope in the Burmese tradition.

Another thing to mention is the very deliberate use of the word Burma as opposed to the official name Myanmar. Aung San Suu Kyi also bears the title President of the Federal Union of Burma. You might say that the cover symbolizes a possible future that could happen if, among other things, more western people got engaged in the struggle. It also shows a modernization of a poor country that at the moment is plagued by superstitious rulers who base their decisions upon astrology.

The images for the cover were made using old bank notes from Burma that we obtained from an archive here in Stockholm. We created a kind of collage using Photoshop and parts from modern, Swedish bank notes were also used (the western number 1000 and its sliced version, as well as the burmese translation).

The folder was printed in 4000 copies and distributed as a supplement to a magazine, as well as by hand. It is featured on the site ffffound.com, that is a site displaying interesting design (only the backside in this case though). I think this is the only time we’ve done design from a possible future; interestingly enough designers tend to view backwards when creating artwork rather than trying to envision the future.

I find it intriguing that this isn't the sole instance of the use of a hypothetical design of Burmese currency to suggest a more democratic future. Some web research turned up the image below, a 5000 kyat note also featuring Aung San Suu Kyi, but this time evidently for a Burmese audience, with no concession to English speakers.

This comes from a dissident blog and was posted last October under the title "The New Burmese Currency Notes for the Future of Burma". I wondered about the circulation of such presumably inflammatory ideas, so sought the insights of a friend who is far more familiar with these issues than I am (but who, tellingly, preferred not to be named here because of the risk of being blacklisted):

websites and blogs with anti-government expressions continue to proliferate the burmese e-world and understandably so given not only the existence of those inside burma who oppose its iron-fisted governance, but the large expatriate community scattered all over the world who have been frustratedly speaking out for decades.
...
a year has passed [since the demonstrations which made world news last September] and there has been no visible changes in governance from the viewpoint of those who then took to the street -- protests that included the marching of the monks.
...
so if mimic currency portraying ASSK is indeed being designed or circulated, the folks who are doing so probably are risking their lives and their livelihood. but they're also envisioning a future where Burma will revert to being ruled by those whom they believe should rule: civilians (as depicted by national heroes such as Aung San Suu Kyi--currently under house arrest in Rangoon--and her father Aung San--who was assassinated in 1948 and could be regarded as the "George Washington" of Burma) vice the military.

however small the movement, it's a bold move. perhaps a brave new world awaits the Burma of the future, albeit it may not be in the very near future!

I also located a fascinating report from just last month that some people are writing messages on currency already in circulation, in support of their imprisoned leader:

A unique movement has been started by Opposition groups in Burma. Activists have launched a campaign for the freedom of the Burmese democracy icon and Noble Peace Laureate by writing: 'May Daw* Aung San Suu Kyi be free as soon as possible' on Burmese currency notes.

Some pro-democracy activists in Zeegone Township in Pegu Division wrote the message on Kyat 500, 200, 100, 50 and 10 denomination notes with pencils and bought goods with them from nearby shops, activists said.

However, Mizzima was unable to verify the information from independent sources.

"The campaign has been launched by well wishers of Daw Aung San Suu Kyi who want to see her free," another activist said.

Some shops unwittingly accepted the currency notes while other shop owners did it knowingly.

The regime usually views any expression on Daw Aung San Suu Kyi, under house arrest for over 12 years in Burma, with suspicion even if it is peaceful dissident political activity. And it can fetch a prison sentence because it is deemed a punishable offence.

The use of currency as a vector for conveying political messages both literally, as in this case, and symbolically, as in the future artifacts described above, constitutes a really interesting mode of activism, repurposing the official paraphernalia of nationhood.

For me this find also puts the discussion of experiential (tangible, visual) futures at this blog in a somewhat different light from usual. I'm reminded of Indian scholar Ashis Nandy, who has called futures studies "a game of dissenting visions". This phrase has long resonated with me.

And from time to time I remember that for all the narcissistic chatter and sloganeering about democracy in the countries I happen to know best, in fact the realisation of basic freedoms as an everyday experience and mundane habit remains for large swaths of the planet the province of the future; the stuff of fervent, if necessarily private, hopes to be realised "as soon as possible". It is instructive to see visual manifestations of this dream-future playing a part, however modest, in its gradual realisation.

Update (29/10/08): Marcus at Alphabetical Order kindly sent me a hard copy of the Burma document they made, a 28-page booklet the size of a brochure, which arrived here in Hawaii last week. The cover, printed with the two different sides of their 1000 kyat design, and no other title or explanation, has the look (but not the feel) of paper currency. There aren't any other future elements to the design, but even so, I have to say that actually holding tangible future artifacts makes me so much happier than just seeing images of them online.

Not that I want to get anyone in trouble, but really, these things are crying out to be produced as high-end print artifacts and smuggled into Burma. 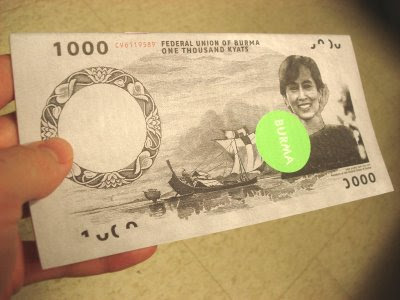 Fascinating stuff, Stuart. Thanks for sharing.

Incredible! It's our folder that we produced in 2005. It's still looking great and the struggle still continue.

If you know swedish you can read more about our work at: http://www.s-studenter.se/index.php?sid=1&pid=43 and http://burmautskottet.blogspot.com/

Join the fight for democracy!

Great post.Just a quick note it is important that Burmese translation being accurate and efficient can indeed not be overstated. Especially in the ever faster moving world of globalized business, successful information and technology transfer within multinational businesses can make the difference between win or lose.