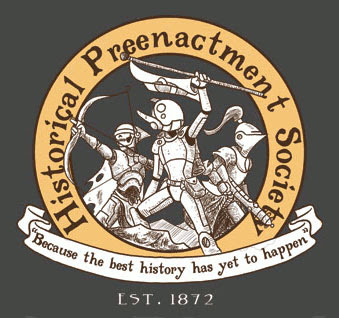 Artwork by Aaron Diaz | via preenactment.org
At Burning Man this year I was intrigued to see in the schedule a theme camp called "Time Colony", featuring some sort of collective named The Historical Preenactment Society.

Now, historical re-enactments have long smacked to me of the thoroughly bizarre. It could be a result of exposure at an early age to Monty Python (see for example the unforgettable Reenactment of the Battle of Pearl Harbor, by the Batley Townswomen's Guild). Pre-enactment, however, while no less bizarre, is admittedly something of a preoccupation of mine (exhibit A, exhibit B).

My search for Time Colony around the advertised intersection was a bust, because (I later found out) the camp had been relocated at the last minute, so I missed their scheduled events. When I did eventually find it, I was pleased to make the acquaintance of one Nick Ernst, the camp's affable coordinator who in real life is an undergraduate student in maths and physics at UC Santa Cruz. Nick told me all about what they had been up to. He's just recently posted a description of their efforts at his blog...

The cyborg leader made to untie the robot at that point. Someone in the audience held up a gun and fired twice. The robot and cyborg leader fell. After a silence, a cyborg yelled "Murder! Double Murder!" And fighting ensued.
Everyone stopped for the end narration: The audience member who had shot the cyborg and robot was charged with two accounts of murder in the first degree. The robot was thus recognized as an entity with the right to life, and so this tragic event spurred a big step forward in the fight for robot rights.

This was, as far as Nick knows, the first instance of future performance to travel under the name of "historical preenactment". The concept for the Historical Preenactment Society was borrowed, he explains, from Dresden Codak, a webcomic by Aaron Diaz that will thrill anyone equally interested in manga-style artwork and The Kurzweilian Singularity. (Check out the comic's instalments featuring the Society's first and second mentions, but note they're both part of a longer story that starts here.) Nick has also set up a Facebook group for his version of the Society (296 members and counting -- and there are four or five other chapters, too). Meanwhile, someone else has (independently?) created a website for Society activities, the first instance of which is apparently a concerted group involvement in Superstruct, the massively multiplayer forecasting game set in 02019, which is currently underway. The entrepreneurial artist Diaz has also put HPS t-shirts on sale here.

While we eagerly await news of the group's next intervention, here's another bit of gleefully anachronistic entertainment, sent to me today by Zander Rose at the Long Now because "it reminded me of your projects but in reverse": Tweet Capsule is a twitter feed by Amos, "time twittering" from exactly 100 years ago with Blackadderesque snarkiness.  For instance, 6 October 01908:

Related posts:
> Humans have 23 years to go
> In memoriam
> Experiential scenarios on video
> My first Burn
Posted by Stuart Candy at 4:13 pm