Climate change for fun and profit 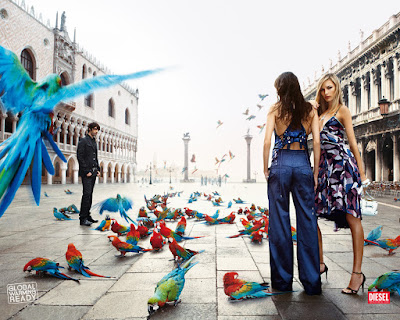 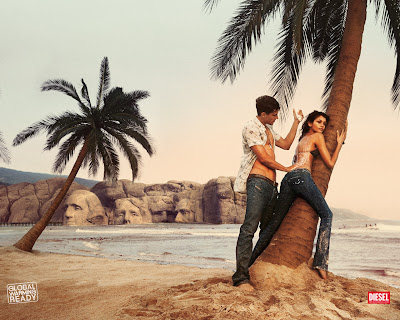 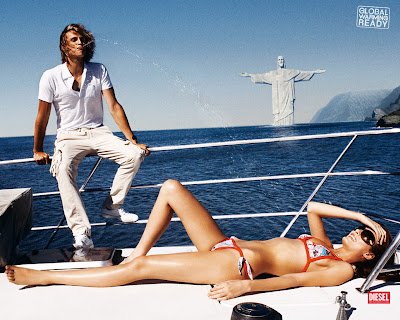 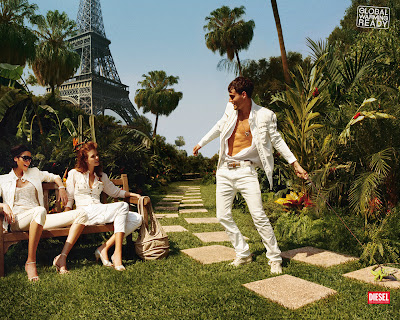 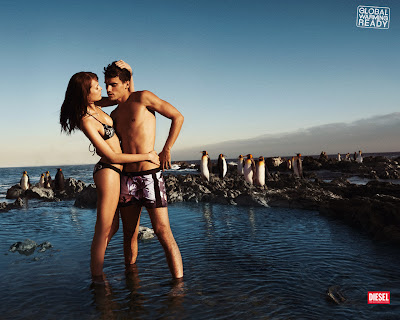 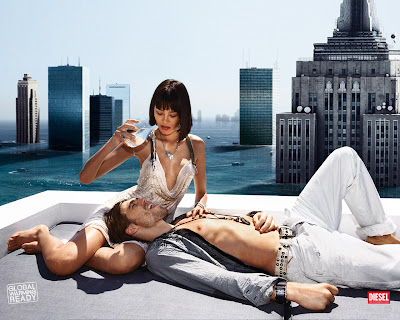 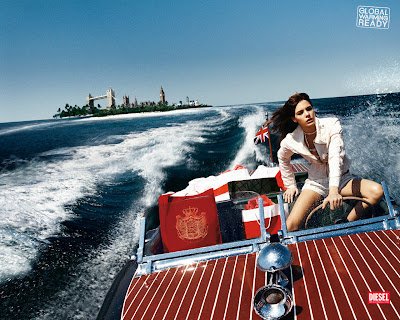 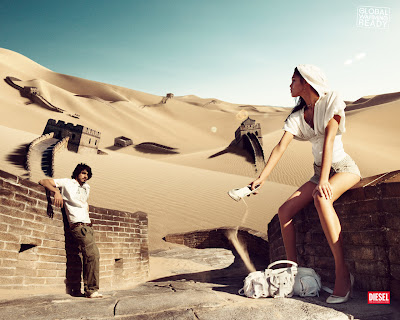 In recent months, amid the general clamour about global warming, there have been reports (New York Times; Wall Street Journal) linking shifts in fashion and clothes manufacture to climate change. I should confess that few topics interest me less than fashion -- perhaps only the overlapping subject of celebrity lifestyles outrates it on the triviality index -- but that example illustrates how, sometimes, developments at this outer layer are interwoven with threads of change I'm motivated to follow more closely.

The above images are another example. They come from an early 02007 print advertising campaign for Italian fashion label Diesel, called "Global Warming Ready". The tensions surrounding it provide an opportunity to consider the politics of commercial futures imagery.

It isn't difficult to see why the campaign was controversial. From a Washington Post article:

These ads are tongue in cheek, but that may not be apparent to anyone but Diesel customers, who've come to expect this sort of thing. In the past, Diesel has run ads advocating the smoking of 145 cigarettes a day (for that "sexy cough") and the drinking of urine to stay young. The company has also attempted to "sponsor" happiness. The irony is of the dark, European sort, best consumed in the company of Gauloises and knowing laughter.

It's true -- not everyone enjoys this species of irony. I first came across this series via the waterlogged Rio shot (third from the top), which was noted disapprovingly in the groundbreaking "journal of the mental environment", Adbusters magazine (edition #72). Duncan's Print, a blog on print advertising, also reported some other unabashedly negative reponses:

Mel Young, at New Consumer, calls for a boycott of Diesel’s clothing line. “Diesel is appealing the worst aspect of human nature – one of greed and selfishness. Perhaps the people who own Diesel might like to watch films of children dying in floods in Bangladesh, where existing floods are being exacerbated by climate change. It might just get them to understand that making ‘funny’ little advertising campaigns out of misery really is beneath contempt.”

Paul Harrison at The Varsity Online is similarly scathing. “It is clear that Diesel is far less concerned with fomenting political activism and lifestyle change than they are with selling their brand. As far as corporate social campaigns go, this attitude is hardly surprising, but Diesel’s campaign is particularly inept, blatantly self-interested, and woefully uninformed.”

Now, I'm no Diesel customer, and following this encounter, I'm no more interested in buying overpriced clothing than I was before. Also, I'm a subscriber to Adbusters, whose anti-authoritarian sensibility and culture-jamming aesthetic I greatly appreciate.

I have to say, part of me welcomes this humorous -- even cavalier, I suppose -- treatment of global warming, an issue frequently treated with an earnestness and gravity amounting to pretension (the feature which, ironically, most turns me off about fashion). Subversive play on a weighty matter of public concern was, not surprisingly, precisely the intention. The Post again:

People have become used to learning about global warming in a serious and science-heavy fashion, says [the company's creative director]. Spoofing the issue provides a "bigger shock," he says, possibly provoking consumers to think more.

Possibly. The funny thing about the "Global Warming Ready" campaign is that Diesel gets to have it both ways. Its arch attitude represents the triumph of cleverness over meaning, of sarcasm over what's sacred. It speaks to a culture of parody, in which the meta-news is invoked before the actual news is digested. [...] The photographic landscapes of Diesel's print campaign are surreal, but certain conventions of the fashion world are secure: The models are still svelte, and stylishness still triumphs over all. You can't be too well-dressed for the apocalypse.

The point is well taken: these photo-illustrations, despite ostensibly supporting a cause -- climate change awareness -- maintain an expensively-dressed arm's length from its more serious implications.

But how offended ought we to be? After all, the "culture of parody" is only part of our culture.

This usage of future imagery contains several dimensions, and might be evaluated differently in view of each. Here are some that spring to mind:

As playful comment on global warming, it's not vastly different from the scuba-like footwear we saw not too long ago.

As ingeniously conceived and smoothly executed "future" artwork, it's comparable to the (similarly themed, post-sea level rise) Mattingly images I enjoyed so much and blogged here recently.

As a piece of shameless future-colonising, it's comparable to product placement in feature films with future settings -- but more forthright, and to that extent less insidious.

And, as a ultimately profit-motivated contribution to the welter of images of the future out there, well, I side with the Adbusters set in wishing companies weren't so single-minded in turning everything to the pursuit of profit. (The fact that they are is a systemic problem we'd more wisely blame on corporate structures and capitalist economics than on this particular company.)

It's culture-jamming the culture-jammers... which is fine, to my mind, even if I happen to disagree -- because in the war of memes, there's always another move to be made. How would the images speak differently if, instead of being labelled with the brand that commissioned them, they were generically rebranded "The Fashion Industry" -- global-warming ready? (Really -- how ready is anyone?) Its naivete laid bare; the absurd shallowness of its engagement with a massive issue betrayed.

Another would be to recognise, and even abhor, the vacuity and moral bankruptcy of the motives, while cracking a smile at the execution. Can no one join me in chuckling at the additional irony of all this from a brand named after a fossil fuel?

Or perhaps the prospect of global warming should be considered taboo, a topic to be handled with circumspection and care, and not invoked in satirical -- or commercial -- contexts. In contrast to the hypersensitivity of responses along these lines (here's another case in point), it seems to me more useful to regard climate change (in whatever form, and with whatever causes) as a reality we'll have to learn to live with -- which includes understanding that it will be coopted, distorted and refracted through the full panoply of political agendas.

One last point: Dator recently (26/11/07) commented as follows, in an email exchange about the relatively sudden appearance of mainstream awareness of environmental issues that many futurists and ecologists have tirelessly pointed out for decades:

The chorus is indeed swelling -- from total denial of any problems to near hysteria. All the more reason for us to put the effort in to helping people surf the tsunamis, and not just cry in despair or denial -- or rage.

It may be that "surfing the tsunamis of change" -- the metaphor he has long used for describing the invention and pursuit of the best scenarios we can, given the forces of change to which we are subject (example) -- is too glib for some tastes. For my part, it's the most apposite of the many metaphors for living with change that I've heard: we do, I think, need to learn to surf, not rage against the waves (or in this case bemoan the narrowness of corporate priorities, or the entirely unsurprising superficiality of the fashion industry). We must find ways to turn the considerable momentum of the prevailing cultural tides to our own ends, and to enjoy ourselves in the process.

Because, as far as anyone can see, not only is the water rising -- the waves are getting bigger.


(Images via I Believe in Advertising blog. Also, for the very keen: this not particularly good video from the same campaign, which is rather less eloquent than the stills alone.)
Posted by Stuart Candy at 3:07 am