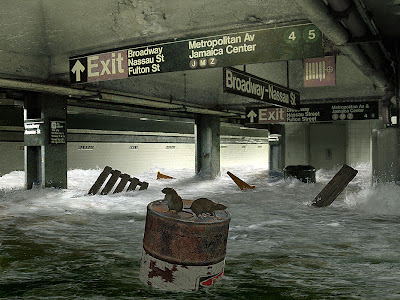 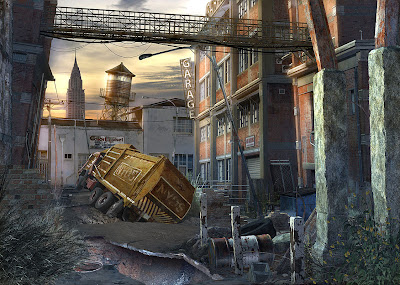 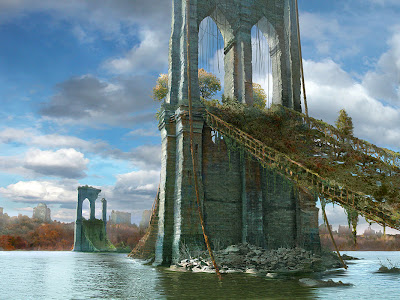 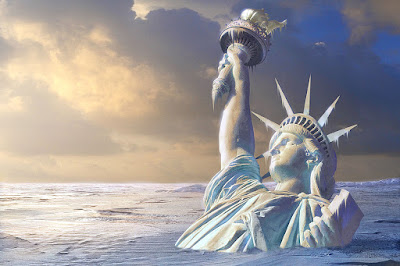 Image: Mondolithic
Wending its way to me through the US Postal Service as I type is Alan Weisman's 02007 book The World Without Us, described by Bill McKibben (quoted in a spooky animated intro to the book's website) as "one of the grandest thought experiments of our time" -- in principle, right up the proverbial alley of the sceptical futuryst.

The book imagines "what would happen if the human species were suddenly extinguished [...] a sort of pop-science ghost story, in which the whole earth is the haunted house" (from a New Yorker review extracted at Amazon). When I first heard about it, I assumed for some reason that it was a picture book, which turns out not to be the case. But these days a compelling bit of apocalyptic fantasy doesn't seem to be confined to text for long, and in July 02007, an interview with Weisman appeared in Scientific American accompanied by a series of illustrations envisaging the gradual decay of New York City. These were produced by Mondolithic Studios, an illustration and design firm in Vancouver with a strong record in futuristic and science fiction imagery.

On the basis of this work, report the artists, an additional image along the same lines was commissioned by Expresso magazine in Lisbon, Portugal, depicting the city's 25 de Abril Bridge, to lend local flavour to their coverage (see below). It was incorporated into a slideshow at the magazine's website posted 26 October 02007 (and featuring the theme from Blade Runner as background music!) 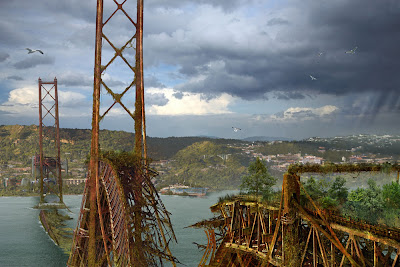 Lisboa e a ponte 25 de Abril vistas de Almada, 300 anos depois
Image: Mondolithic
I'm fascinated to learn that a feature film adaptation of The World Without Us is in the works, slated for release in 02009 (there's a pdf prospectus at the book's website). It's being scripted by Michel Fessler (March of the Penguins) and directed by Jacques Malaterre, who made a three-part documentary series called A Species' Odyssey (review) about the evolution of humanity.

I'll reserve judgment on all this until I actually get a chance to read the book, but I want to say I find The World Without Us phenomenon interesting for two reasons.

The first is the fact that this "thought experiment", though initiated in text, simply begs to be manifested visually. Regular readers of t.s.f. will be thoroughly unsurprised that I see here an example of my usual contention; that good quality futures thinking wants to be more visual and visceral than it has been hitherto. This is the way to get through to people. I hope, of course, that the film version manages to deliver on the tantalising promise suggested by these eerily beautiful images dreamed up by the artists at Mondolithic. What impact the film might have, if any, I can't really say anything meaningful about for now.

The second point I want to make -- as much a bookmark for my own future reference as anything -- is that, while addressing what may seem a rather morbid theme, its popularity suggests a resonance with what I see as our contemporary mood of pop existentialism, associated with big-picture threats such as climate change. (The book has spent several months on the NY Times best seller list, and is currently #25.) I can't do justice to this line of thought here, but in short (and contrary to the pejorative reading it may invite -- "we're narcissistically obsessed with our own demise"), I wonder if this couldn't more helpfully be regarded as positive evidence of a sort of coming of age. There may be, it seems to me, a long delayed and long denied -- especially in callow Western culture -- collective realisation of our species' mortality, akin to the experience each of us has in our childhood or youth of awakening to the prospect of our own death, out there on the horizon. It's the same thing I think about when I consider Jared Diamond's bestselling book Collapse -- that these kinds of salutary thoughts are gaining currency might be seen as signs of emerging maturity. 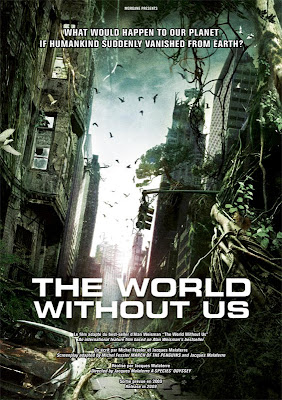 (From the movie outline:)

Given the rapidly increasing human population and the phenomenal reach of our technologies, humankind has been become a real force of nature. Human activities have shaped our planet for better or for worse. We are involuntarily changing the climate; alerting, polluting and eradicating ecosystems; and driving evolution as other organisms struggle to adapt to a new human-made world. So, what if humankind suddenly vanished?