The go-to guys for post apocalyptic chaos and destruction 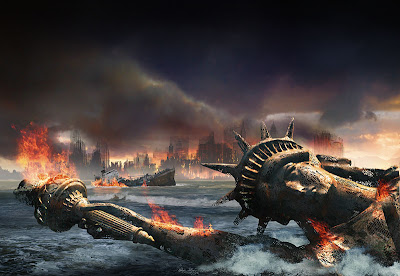 In an instant the ship, the container docks, Newark Airport, and everyone within a half-mile radius is vaporized. Seconds later the shock wave smashes into lower Manhattan, knocking the Statue of Liberty off her pedestal and blowing out skyscraper windows in the financial district. Shattering glass cuts down thousands, while a poisonous nuclear squall rises from the blast zone and rains over a 10-mile area. In a microsecond, 15,000 people in New Jersey and New York are killed or wounded, and 200,000 absorb enough gamma rays to keep their doctors counting for the rest of their lives.

The economic damage only begins with the hole blown through the $100 billion annual revenues of the Port of New York and New Jersey. Within half an hour every port in the United States is closed and every container in the global shipping lanes suddenly looks like it’s hiding a potential Hiroshima or Nagasaki.

Some experts give this or a similar scenario a 51 percent probability over the next 10 years. 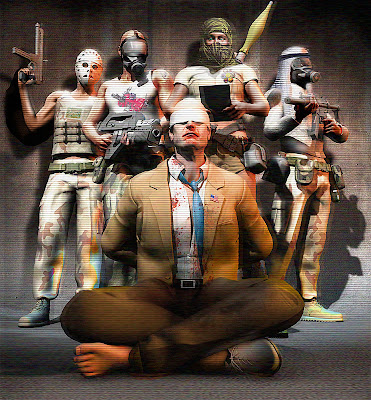 For an entire week the senator goes off the scope. Nada. Then come the videos. The first appears on an obscure Web site in Yemen. A hooded man with a sword in one hand and the scruff of the senator’s neck in the other peers into the camcorder and says, “We are holding a senator infidel.” Then the screen goes blank. Two days later a second tape surfaces on the Internet, this one in British Columbia. Holding the sword over the senator’s head, the hooded figure gives the president three days to release all Muslim prisoners in Guantánamo Bay.

The president offers prayers for the senator and his family and says, “We don’t negotiate with terror.” 60 Minutes does some tech work with the video: In the grainy image, the senator appears to be saying “fuck you” to his captor, a signal that he stands with the commander in chief. The deadline passes. The last video appears on a Web site at MIT that mirrors the home page of the Department of Homeland Security. Somehow the terrorists have hacked into MIT’s system to create the page, and before the rest of the world is entirely clear on whether it’s looking at the real thing or a mockery, the sword swings, the senator is beheaded, and the page gets five million hits. And, yes, Bush’s refusal to negotiate suited Al Qaeda to a terrorist T. What they really wanted was to step up the media frenzy so Americans would be scared to death in front of a TV audience from Casablanca to Jakarta.

Twenty-four hours later a hiker in the Potomac River Valley finds a headless body near the Chesapeake & Ohio Canal. The next morning an Express Mail package postmarked Leesburg, Virginia arrives at the senator’s office. Inside is the senator’s head, wrapped in a printout taken off the official Web site of the U.S. State Department: Response to Terrorism. “The war on terror is a different kind of war, waged capture by capture, cell by cell, and victory by victory. Our security is assured by our perseverance and by our sure belief in the success of liberty.—President George W. Bush.” 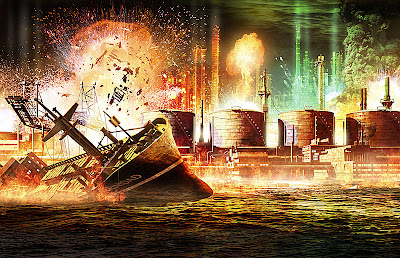 The Texas fires burn for a week. Under the pall of oily smoke, rescue workers retrieve the bodies of the 12,000 people killed by the flames and toxic gas. ExxonMobil, ConocoPhillips, and Shell all close their refineries to search for bombs. A quarter of the U.S. refining capacity is crippled. Oil prices skyrocket, destabilizing the market. Gas station lines grow even longer than they were during the energy crisis of the 1970s.

No one knows the vulnerabilities of the American oil and gas industry better than the Middle East, and this scenario would be patently Al Qaeda: cheap, effective, and dirty. 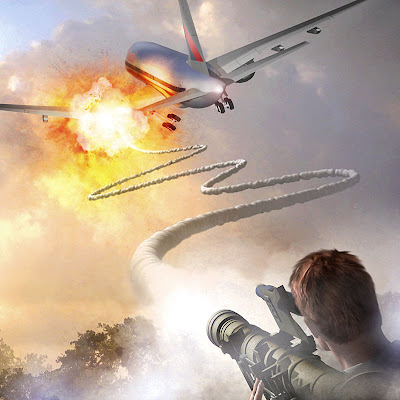 "Man with a Missile: On 9/11 our planes were turned into weapons. Soon the weapons may be turned on our planes."
Image courtesy Kenn Brown, Mondolithic Studios

Inside the jet Deborah James, a 32-year-old mother on her way home after visiting family in Costa Mesa, feels a jolt, then looks out her window to see smoke pouring from the port engine.

“What the…” Don Martinez, the plane’s captain, says, but before he grasps the situation the engine explodes, taking much of the port wing with it. The plane rolls violently into a dive as screams fill the cabin.

Martinez and his copilot try to pull out, but with no wing it’s futile. He starts to radio an SOS, then realizes he’s looking at a street corner from an inverted angle at an altitude of about 400 feet. He can see the long morning shadows of a group of kids waiting at a bus stop.

The fully fueled 737 careens into densely populated Balboa Island, engulfing four square blocks in a 2,000-degree fireball. Flying wreckage rips Newport Bay into a froth and tears into bodies a half-mile away in downtown Newport Beach. The pilot, crew, and 162 passengers are lost. Another 40 die on the ground.
[...]
For 12 hours every flight in the United States is grounded while airports check their perimeter security. In the ensuing weeks, commercial air traffic sinks by over 20 percent, threatening every American carrier with bankruptcy and punching a multibillion-dollar hole in the country’s $552 billion travel industry just as it’s promising to regain pre-9/11 levels of revenue.

You can take this one to the bank. Stray MANPAD attacks have already happened in places like Kenya, Rwanda, and Baghdad. An Al Qaeda sleeper wouldn’t need much training to pull the trigger.

Kenn Brown and Chris Wren are Mondolithic Studios, the design firm which produced the post-humanity images for Scientific American that I recently blogged here. Last week, I was in touch with Kenn about a remark at the Mondolithic blog -- "funny how we are slowly becoming the go-to guys for post apocalyptic chaos and destruction" -- referencing the fact that those World Without Us illustrations were not the first disaster-scenario images commissioned of the artists. Earlier came a set for an article in Maxim men's magazine, "The Second Wave", about possible terrorist attacks on U.S. soil. The article, several scenarios from which are quoted above together with the corresponding images, appeared in the June 02005 edition (you know the one, with Jennifer Love Hewitt on the cover? C'mon dude it was a classic!). The web-archived version, however, does not include these illustrations, which Kenn has kindly provided.

The scenarios they were called on to illustrate were based on the advice of Col. David H. Hackworth, "the U.S. Army’s legendary guerrilla fighter and best-selling author". Says Maxim: "Hack came back with five plausible scenarios for Al Qaeda’s next surprise attack. But he warns that these are just a few of the hundreds of equally horrible 9/11-type events that may hit the homeland sooner than we think..."

I do find it intriguing the way certain types of disaster scenario (frequently, and disingenuously, described as "unthinkable") are in point of fact, not only thinkable but thoroughly, morbidly fascinating, and indeed used to sell pop magazines. How we as a society interact with -- some might say dwell upon, obsessively -- certain fearful possibilities has for obvious reasons become a focal point for political critics in recent years (e.g., documentarian Michael Moore's Fahrenheit 9/11, and Adam Curtis's excellent three-part The Power of Nightmares). But the flirtation with disaster, with imagining futures that are not only suboptimal but which could fairly be called horrific, resonates with other diverse, curious and yet widespread risktaking behaviours, including playing with fire, riding rollercoasters, watching horror films, and voting.

The question that falls for our consideration: is there any way that preferred future scenarios can possibly match the visceral thrill, the can't-tear-your-eyes-away quality, of the nightmares which seem to have so little difficulty gaining traction? I know, I know. Happy doesn't sell. And until quite recently, even dystopian scenarios unfolding on a longer timeline (e.g., oil scarcity, sea level rise) didn't get too much attention -- probably because it's much harder for these problems to cut the requisite dramatic mustard than explosions and beheadings.

It is not a failure to engage the future or its uncertainties in toto that characterises American public discourse today. It's the (partly unwitting, yet) selective use of fearful images to galvanise public feeling, together with the lack of vividly expressed, preferred scenarios based on anything firmer than dogma or wishful thinking.

So who, really, are the go-to guys for post apocalyptic chaos and destruction?

Nominations are now open.
Posted by Stuart Candy at 8:27 pm