The future of driving, today. Not.

A conversation with a client this afternoon about driverless cars reminded me of a striking, full-page BMW advertisement I'd seen back in 02005, in a British broadsheet newspaper. I managed to track it down online (click for enlargement)... 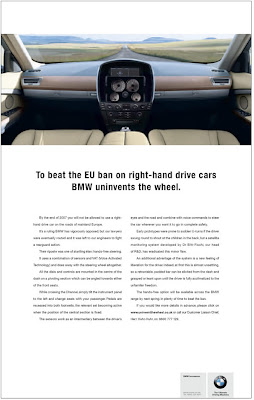 Image: BMW Education Programme
Bear in mind that the Brits drive on the left side of the road, continental Europeans on the right. The text begins:

By the end of 2007 you will not be allowed to use a right-hand drive car on the roads of mainland Europe.

It's a ruling BMW has vigorously opposed but our lawyers were eventually routed and it was left to our engineers to fight a rearguard action.

Their riposte was one of startling élan: hands-free steering.

It uses a combination of sensors and VAT (Voice Activated Technology) and does away with the steering wheel altogether.

All the dials and controls are mounted in the centre of the dash on a pivoting section which can be angled towards either of the front seats.

I remember, at first, being taken in by the ad, which on closer inspection turned out to be an April Fool's Day prank. What I didn't realise until today is that this spoof ad was part of an annual tradition at BMW (in the UK, anyway). Says the company website:

Each year WCRS (BMW's advertising agency) produces a tactical April Fool's day advert which appears in the broadsheet press on April 1st only.

The April Fool's day concepts are designed to teeter on the verge of credibility, therefore taking in scores of slightly less vigilant readers. The concepts tend to focus on a new and revolutionary piece of technology from BMW, yet push the idea just beyond the plausible.

The tongue-in-cheek adverts take exactly the same format as all non-spoof BMW adverts, hence it is down to the reader to notice the difference between the plausible and the non-plausible.

April Fool's day adverts have become a BMW tradition primarily aimed at BMW drivers as a once-a-year opportunity for them to drop their guard and have a laugh at themselves. They have all the wit generic to many of BMW's brand adverts and allow the intelligent owner to feel part of the BMW tradition.

The ideas in the past have covered a range of themes and ideas to test the credulous and humour the knowing:

Some of the concepts are more self-evidently whimsical prank material than others. I realise, on reflection, that steering-wheel free cars and driverless cars aren't at all the same thing. But this ad's concept, the former, neatly plays into the long-anticipated science fiction image of the latter.

An encounter with an ad such as this, in a credible context (British broadsheets, on days other than April 1, are pretty stern) can pull off the trick of having a presumably possible future technology take you by surprise. It thereby achieves a response we like to aim for with some of our future artifacts: a minor hoax, or simulation, of a possible future insinuated into the present; a sense of the future arriving early. The subject matter of this example is a little too benign to qualify as future-shock therapy, but it's a nice, playful bit of future-forward design (and self-parody) nonetheless.

I do very much like the ad company's concept brief for this series, which "tend[s] to focus on a new and revolutionary piece of technology ... yet push[ing] the idea just beyond the plausible." (I'm also highly amused by idea of pretentious BMW-driving jerks enjoying a "once-a-year opportunity ... to drop their guard and have a laugh at themselves".)

My favourites from among the other mock ads: 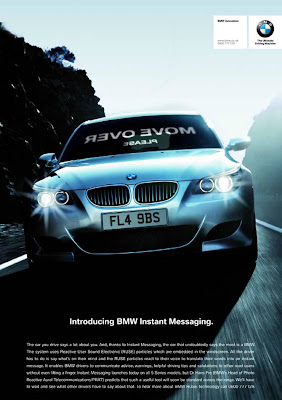 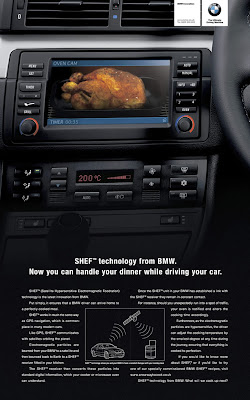 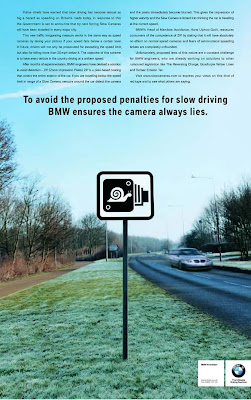 I also learned today that Spanish car manufacturer SEAT announced "the ultimate in 21st Century motor racing – the driverless touring car" -- on 1 April 02007 (report at Autoblog). Another hoax, it turns out, but one that strikes me more as a witless publicity ploy than a revealing and amusing play on future expectations (sure, I'll cut a clever publicity ploy a lot more slack).

Funny the way the line between absurd, science-fiction fantasy and prototype is constantly in motion. Dator's second law strikes again.
Posted by Stuart Candy at 3:42 am