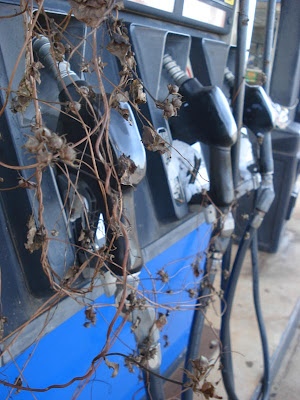 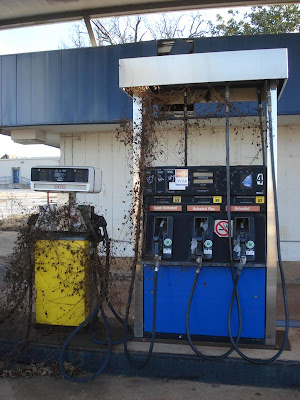 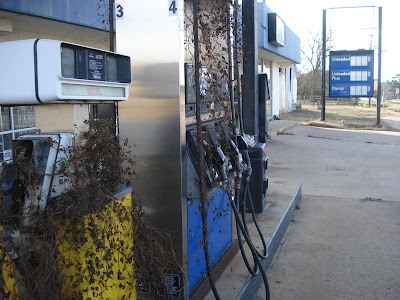 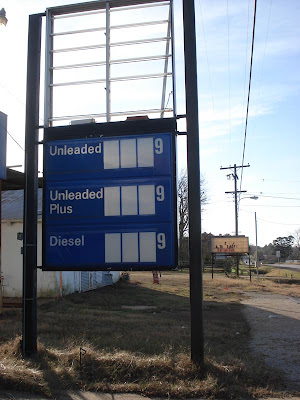 During my road trip in The American South with Mr Matt Jensen -- pretty good driver, really good designer -- at the end of December 02007, we passed this defunct gas station in tiny New Summerfield, Texas (pop. 998). Which gave me an idea for a photo essay exploring the experience of a World Without Oil (a bit like the alternate reality game blogged here recently).

The five shots above are unretouched, and in that sense as close to documentary (vs photoshopped hypotheticals) as photos get. They're plain little snaps -- I took them on a 6.0MP camera set to capture at 3.0MP -- and in the hands of a better photographer there'd be more artistry to them -- but the point that's interesting to me here is the possibility of present-day photographs evoking future scenarios.

In the context of a discussion about a post-oil America, they take on an air of foreboding; begging the question, in tones perhaps more subtle than most future artifacts seen in this space, "Is this our future?"

As I write it occurs to me that these images (and perhaps future artifacts in general) might be considered visual metonyms. Metonymy is a term from linguistics denoting expressions where a part stands in for the whole. (For example, "Check out my new wheels". Here, the word "wheels" stands in for an electric car, wisely selected by its proud owner in anticipation of an imminent oil crisis.)

However far I may appear to stray from it, my point is that such photos, like other futures artifacts, perhaps, serves as a stand-in -- an icon, a tip-of-the-iceberg -- for a much larger, more far-reaching social scenario.

Also, they highlight the fact that images of possible futures, including of post-peak oil scenarios, need not be technologically "futuristic" in the usual way in order to serve as fuel (pardon the pun) for deepening the conversation.

I sense some promise here, in this less labour-intensive approach to futures imagery, which I'm looking forward to exploring as we go along.

eBambi
The Models - Photographers (but not only) social network.
Join now:
http://www.ebambi.com

Nice shots, Stu. I am left thinking about Gibson's aphorism: the future is here, its just not evenly distributed.

Generally, this phrase is invoked when referring to new high tech gadgets, medical advances, and the like. I think these photos make us keenly aware that there are other futures out there that aren't quite evenly distributed yet as well.

Funny you should say that -- it occurred to me last night that the Gibson quote, describing the patchy onset of any given trend, is what these kinds of photos seem to imply. (Again, seems Gibson's idea was already here, just not evenly distributed... though it's gotta be pretty close to saturation by now.)

It bears closer scrutiny, though, because as you point out, his insight is typically invoked in a context of technology penetration, where it comfortingly suggests that "the" future is known and "the" path to it sure; but with some folks -- individuals, organisations, industries, countries -- simply taking it faster than others. (How nice for them.)

For instance, it rhymes with the unilinear-path assumption embedded in the very label of every so-called "developing" economy. (The "developed" West implicitly models the future of any number of countries in Asia and Africa.)

If we go to another reliable futures/change management metaphor, having to do with seeds of change, -- some of which quickly germinate, grow, flower, and bear fruit, while others do so more slowly or not at all -- we can see what's left out of this conception; namely, everything else. All the other delights of the garden. Variety. Choices. Alternatives. Contingency.

These photos might be regarded as harbingers of possible future gardens; plants with cropping potential.

They're not only visual, but temporal metonyms; examples of sights we might expect to see more often if the scenario they iconically reference were to come to pass.

And -- I think you're right on -- especially useful for evoking the hidden or underrated possibilities, the patterns for underdog futures which are always already manifesting here or there.

Some other, wiser language probably has a word for that moment when you see a microcosmic thing that communicates to you the macrocosm that must exist behind it. Or, as with your photos, the macrocosm that's no longer there. In America, we implicitly know that when the last gas station packs up and leaves, the town is truly dead.

Along those lines, the future objects that hit me in the gut are the repurposed ones: The Hummer car dealership that's now a refugee camp, the gutted Honda that now uses its alternator as a windmill, to name just two examples from WORLD WITHOUT OIL.