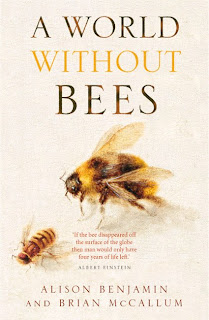 Today I glimpsed an advertisement for this in the Guardian's Saturday magazine, Weekend [print p. 54], and wondered: some lame entomological ripoff of The World Without Us?

In fact, it's no hypothetical entertainment, but a sort of latter-day Silent Spring, published in Britain last month, which sounds the alarm on a very real ecological crisis in the making.

A Guardian article by the book's co-author, Alison Benjamin, explains:

Since [November 02006], close on two million colonies of honeybees across the US have been wiped out. The strange phenomenon, dubbed colony collapse disorder (CCD), is also thought to have claimed the lives of billions of honeybees around the world. In Taiwan, 10 million honeybees were reported to have disappeared in just two weeks, and throughout Europe honeybees are in peril.
...
UK farming minister Lord Rooker [...] warned last year that honeybees are in acute danger: "If nothing is done about it, the honeybee population could be wiped out in 10 years," he said. Last month, he launched a consultation on a national strategy to improve and protect honeybee health.

People's initial response to the idea of a bee-less world is often either, "That's a shame, I'll have no honey to spread on my toast" or, "Good - one less insect that can sting me." In fact, honeybees are vital for the pollination of around 90 crops worldwide. In addition to almonds, most fruits, vegetables, nuts and seeds are dependent on honeybees. Crops that are used as cattle and pig feed also rely on honeybee pollination, as does the cotton plant. So if all the honeybees disappeared, we would have to switch our diet to cereals and grain, and give our wardrobes a drastic makeover.

According to Albert Einstein, our very existence is inextricably linked to bees - he is reputed to have said: "If the bee disappears off the surface of the globe, then man would only have four years of life left."

Bees are a barometer of what man is doing to the environment, say beekeepers; the canary in the coalmine. Just as animals behave weirdly before an earthquake or a hurricane, cowering in a corner or howling in the wind, so the silent, empty hives are a harbinger of a looming ecological crisis. But what is causing them to vanish - pesticides, parasites, pests, viruses? No one knows for sure.

These culprits are considered in turn, and the interlocking factors of monoculture (both the crops and the honeybees used to pollinate them), vulnerability to disease, chemical interference in biological processes, and overwork -- that's right, overwork -- amount to a pretty grim picture.

One thing I'd never thought about or realised before is quite how reliant agricultural industry is on the services of honeybees, for far more than just honey. The article notes, "In 2007, honey production was worth $160m to the US economy, compared with pollination services that have been estimated at $15bn."

The industrial-age model of production, and its ideological counterpart, the conception of nature as a machine, are still very much with us. And with those come systemic weaknesses, threats to our survival, in a renovated global ecology that we have barely begun to understand.

I'd certainly recommend the full article; the book is probably worth a look too. You may also like to read this: Jim Dator, 02002, "Assuming 'responsibility for our rose'".
Posted by Stuart Candy at 6:46 pm

You think this was an accident?

"A truck containing 330 crates of bees, about 12 million of them altogether, overturned on a major highway near the town of St Leonard, New Brunswick, in Eastern Canada on Monday, setting free thousands of irritated stinging insects."

Feel that sting, you Canadians? That's pride -- oops, no, it's bees. Lots and lots of bees.

Watch as they wreak their terrible revenge on humanity! The History Channel should take a crack at adapting this for TV.

"Drivers on the New Jersey Turnpike have to cope every day with traffic jams, pollution and even the occasional deer.

They ran into a new obstacle Saturday as thousands of honeybees swarmed around their vehicles."