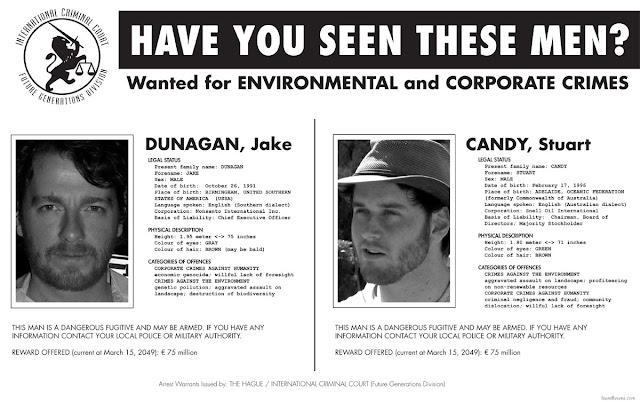 Distinguished climate scientist James Hansen has called for the chief executives of fossil fuel companies to be tried for high crimes against humanity and nature.

Hansen appeared before U.S. Congress on 23 June 02008, the 20th anniversary of his historic speech in the same forum expressing 99% certainty on evidence of the greenhouse gas effect. This time, he urged swift and far-reaching action by the next American president and Congress to bring the level of CO2 in the atmosphere down from the current 385 parts per million (and rising 2ppm annually) to 350ppm.

The Real News Network, an emerging user-funded news and documentary service I hadn't heard of before, released this report:

In an interview with The Guardian newspaper, Hansen added: "When you are in that kind of position, as the CEO of one the [sic] primary players who have been putting out misinformation even via organisations that affect what gets into school textbooks, then I think that's a crime." (Ed Pilkington, "Put oil firm chiefs on trial, says leading climate change scientist", The Guardian, 23 June 02008 [print edition: "Sue fuel firm CEOs, urges climate change pioneer", p. 10]. A written statement by Hansen to accompany the speech is available at the Huffington Post and The Guardian.)

This is a bold call to arms on Hansen's part. Leaving aside whether or not you agree with it (which is bound to depend on how bought in you are on the risks associated with climate change), let's note a couple of points.

First, naturally he has been greeted with a mixed reception, variously pleased or disgusted with his sentiments. No surprise there. What does surprise me is that it appears to have been left mainly to the blogosphere to respond. As I write, more than two weeks after the event, a google search ["James Hansen" crimes] returns the Guardian piece (top hit) and a Telegraph article, both quality British newspapers, in the top ten. The top 100 hits, all relating to this story, are dominated by blogs, environmentally or politically themed sites, and news aggregators. American newspapers are barely represented -- exceptions being a critical editorial in the Washington Times, a Washington Post blog post on the story, and a NY Times blog addressing the speech and the coal industry's retort. To some extent, this reflects the shift afoot in how news breaks and circulates, away from traditional newspapers: witness this recently adjudicated Long Bet. Still, I find this curious -- it sounds like silence, from mainstream U.S. media -- given the prominence of both the audience (the House Select Committee On Energy Independence And Global Warming) and the speaker (among other things, he heads the NASA Goddard Institute for Space Studies in New York City, and serves as Al Gore's science advisor).

Second, the idea of trying corporate CEOs for serious crimes, regardless of whether we like it or not, is an intriguing meme. For the state legislature's Hawaii 2050 kickoff, we at HRCFS staged four immersive scenarios to get attendees thinking more deeply about the variety of alternative futures which could eventuate over that period. One of them, the Silver Room (a "collapse" scenario, in contrast to continuation, discipline, and transformation scenarios) posited an energy crisis, followed by the military taking over to ration resources and maintain order [video]. The poster above was one decor item we installed as a clue to the mentality of this post-collapse society: in the wake of a crisis, prosperity is rewritten as prologue to disaster. Let the blame games begin!

Meanwhile, punitive responses to corporate behaviour are already sought in some circles. I came across this picture today at the Rainforest Action Network, documenting an activist intervention in Washington D.C. last November to highlight the notion of global warming as a crime scene. 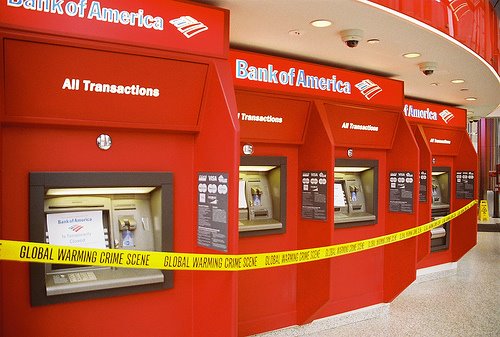 Image from Understory: The Official Blog of RAN

So, Hansen's call is provocative, there is no doubt about that. But it's an idea that is unlikely to go away, I think, due to broad trends around (a) increasing comprehension of the way systemic risks and harms are distributed across space and time, and (b) increasing focus on corporate social responsibility.

We may not get a "Future Generations Division" of the International Criminal Court (as suggested by our poster) just yet, but people do seem to be awakening to the incremental, emergent consequences of habitual behaviours -- like smoking tobacco, which has recently been outlawed in many public buildings in Europe, North America and Australia. (There's an interesting analogy between tobacco and fossil fuel industries. Hansen: "Instead of moving heavily into renewable energies, fossil companies choose to spread doubt about global warming, as tobacco companies discredited the smoking-cancer link.") If the worst happens, and some of the more dire forecasts of climate change materialise, the environmental, economic, humanitarian and security consequences (distributed harms par excellence) could well see corporations, and their main representatives, called to account in ways that apparently seem ridiculous to many at the moment.
Posted by Stuart Candy at 10:28 pm