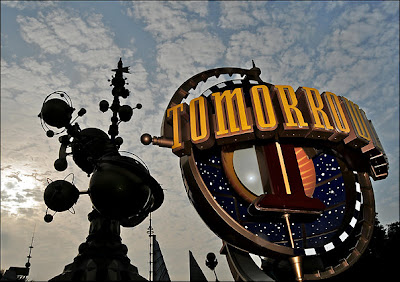 What's interesting about Tomorrowland's newest future is its focus on what doesn't change. This Dream Home future at 360 Tomorrowland Way in Disney's original California park is intentionally reassuring.
[...]
But this is absolutely not the future in the research pipeline. No genetically modified critters here that eat carbon dioxide and poop gasoline. No nanobots smaller than blood cells, cruising our bodies to zap cancer. No brain implants that expand our memory. No cellphones that translate Chinese. No dragonfly-size surveillance bots, no pills that shut off the brain's trigger to sleep, no modified mitochondria sustaining our energy while making obesity as quaint as polio.

Apparently that tsunami of change doesn't sell. That disturbing but dazzling future rumbling our way is distinctly different from the soothing one Disney thinks we crave.

What does this disconnect say about us?
[...]
"Americans feel very little connection to the future anymore," says Danny Hillis.

Hillis is in a singular position to make this statement. He has long been a deity of the computer age, having pioneered massively parallel processing -- now the basis for most advanced computers. Then he was a Disney Fellow, and vice president for research and development at Walt Disney Imagineering. He is now co-chairman of the Long Now Foundation, which fosters long-term thinking and responsibility for the next 10,000 years.
[...]
"What I think it says is that we are nostalgic for a time when we believed in the future. People miss the future. There's a yearning for it. Disney does know what people want. People want to feel some connectedness to the future. The way Disney delivers that is to reach back in time a little bit to the past when they did feel connected.

So: one reason for the retro-orientation of Tomorrowland seems to be that the qualities of the futures that now confront us are alienating. A second reason the article suggests is that, against a backdrop of accelerating change, they're just really difficult to imagine.

"It's much harder to astound people today, " says Marty Sklar, the former principal creative executive of Walt Disney Imagineering, who in 2001 was named a "Disney Legend" for his work going all the way back to Walt's era in the '50s. "They see the speed of change all around them."
[...]
Keeping up is a problem. A major Disney attraction has to last a long time to recoup its investment. To be serious about the future in Tomorrowland, one would have to be constantly vigilant for change, lest you wake up one day and whoops, what's that rotary-dial phone doing on the set? That's one of the reasons Orlando's Tomorrowland has dropped back to the last resort: irony. It's inspired by a change-proof 1920s and '30s Buck Rogers-Flash Gordon nostalgia future. Tomorrowland in Paris -- called Discoveryland -- is a tribute to European seers of previous centuries, like Jules Verne. The antidote to rapid change in Hong Kong -- one of the most futuristic cities on Earth -- is for much of Tomorrowland to be set in an intergalactic space port.

This quandary reminds me of another insightful comment by Danny Hillis, in his 01995 essay "The Millennium Clock" (which called for the ten thousand-year clock now being pursued by The Long Now Foundation):

When I was a kid, three decades ago, the future was a long way off - so was the turn of the millennium. Dates like 1984 and 2001 were comfortably remote. But the funny thing is, that in all these years, the future that people think about has not moved past the millennium. It's as if the future has been shrinking one year, per year, for my entire life.

Nearly a decade after the turn of the millennium, oddly enough, the trend Hillis spotted has continued unabated. It seems that for many, the horizon of the future, incapable of shrinking any further, actually receded into the past. There's been a surge of interest in the way the future used to be, ranging from the scholarly to the satirical: retro-futurism has become a fully-fledged aesthetic genre of the early 21st century. See books like Yesterday's Tomorrows (01996, accompanying a Smithsonian Institution exhibition*), Where's My Jetpack? or Exit to Tomorrow (both 02007). On screen, there's Matt Groening's sharp animated series Futurama (since 01999), and movies like Sky Captain and the World of Tomorrow (02004) or The League of Extraordinary Gentlemen (02003). Indeed, consider the whole literary-genre-cum-subculture of Steampunk which has emerged in the last decade into mainstream consciousness. (Incidentally, the Long Now Foundation's recent event Mechanicrawl taps this aesthetic trend. ) Online, I suspect Matt Novak's excellent blog Paleo-Future -- about "the future that never was" -- pulls in a bigger readership than a lot of current writing about futures that may still have a shot at being realised.

I've written before at t.s.f. about "lost futures", so won't retread that ground here. But clearly, it's not just Disney that is increasingly (whether inadvertently or disingenuously) mining the past in an effort to envisage the future. Ironic, postmodern play with retro-futuristic tropes is well and good. What intrigues and to some extent concerns me is that we seem to have so much difficulty envisaging hopeful futures without immediate recourse to the past -- way back when, we seem to be telling ourselves, such hope was sincere. 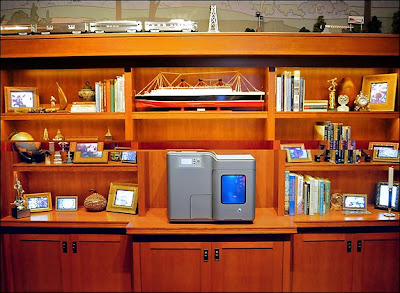 Image: Carlos Puma/Washington Post
"In the Innoventions Dream Home, a futuristic device can render designs in 3-D, but it is surrounded by nostalgia: Lionel trains, an ocean liner, vintage books and candles."
[Caption from slideshow accompanying article]
(Thanks to Chris Jones for posting the article to the HRCFS listserv.)

* This is the most recent active version of the website at the Internet Archive, dated 9 February 02006.
Posted by Stuart Candy at 1:47 pm