Wandering, and leafing, through the future

Two interesting futures-oriented installations by an artist from the Netherlands, Marjolijn Dijkman...

One is called The History of Tomorrow (02007), which she co-produced with Maarten Vanden Eynde as a project of Enough Room for Space, an artist-run collaborative forum established by the pair.

Our contribution to this project was a publication printed and designed similar to the existing (red and blue) evacuation plans that are located underneath every telephone in the Van Abbemuseum [in Eindhoven, NL -- link]. The publication contains a short sci-fi story staged in the near future (starting during the Olympics in 2008).

The fictional story is set around the Van Abbemuseum and describes a situation in the future where the gravitation on earth is slowly disappearing. 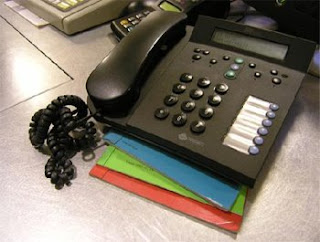 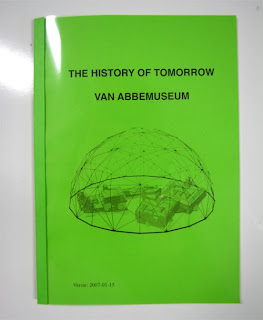 "The History of Tomorrow" publication [pdf] 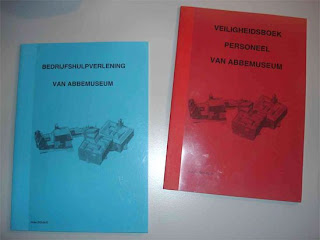 ...and some elements of its habitat
An extract from the story, which was written by Vanden Eynde [html; pdf]:

The loss of gravitation first came to general notice on the 15th of June 2008, during the Olympics in Beijing, China. On that day 27 world records were broken. Michael Keane was the first to catch everybody’s attention. As the only high-jumper to remain in competition, already assured of the gold medal, he decided on a whim to ask jokingly for a ridiculous world record height of 2m50 and jumped over it without apparent effort. He could not believe his eyes. Nor did the jury or the 32.521 shocked visitors that were present that day at the newly build [sic] Qinhuangdao stadium. The equipment was checked and rechecked, but everything seemed OK. He sensed the possibility of an even bigger stunt, and knew he had to seize the moment, now that it felt as if his actions were governed by a force other than his own and he too, like the enthralled spectators, could only watch his unprecedented aerobatics in stunned amazement.

The tale then spins out some of the big-picture implications of its startling premise.

Generally, I'm more interested in scenarios that have been developed as (or translated into) visual or other media than in traditional sci-fi text. However, it's the installation strategy here -- with the booklet physically resembling and accompanying real-world contingency manuals throughout the museum -- that sets the stage for many individuals' unexpected and thought-provoking encounters with the scenario. This fits closely with the recurring themes here at t.s.f.

The second project is called Wandering through the Future (02007). It was commissioned for Sharjah Biennial 8, United Arab Emirates, and has been exhibited since at several other sites. This multi-part installation includes a 60 minute film, which

consists of fragments of 70 film productions from all over the world. Passing all sorts of apocalyptic landscapes and scenarios, the one-hour video leads you through the future from 2008 until 802.701 A.D. in order of appearance. The film tries to examine the way the Future has been given shape and how the different scenarios relate to eachother [sic].

Accompanying this is "[a] printed timeline of the future with collected taglines and dates of major film productions" [in pdf; or click image for enlarged jpg]:

I haven't been able to locate the video online, but the timeline stands alone well enough in providing one overview of the landscape of filmic futures, which (as any moderately attentive movie-watcher will confirm) are particularly rich in apocalyptic portents. In a text prepared for an exhibition of the work in Heidelberg, Germany, Sabine Hillen writes [click for pdf of full document; my italics below]:

The time line, constructed with scenes from the golden age of science ﬁction until the millennium, draws on a broad stock of themes such as snow-clad nature landscapes, explosions that make buildings shake, frantic mobs of people that ﬂee the assault of clocks… What strikes us most, when we consider the evolution in past decades, is that fear becomes increasingly [sic] highlighting fear and the rise of social criticism in recent productions. They ensure that the audience will at all times bear in mind that a disaster is bound to happen in the not so distant future.

The compilation and juxtaposition of a range of cinematic portrayals of the future is a striking (though by no means original) way to invite reflection on the colonisation of this frontier. Another component of the installation takes the idea further, in an unexpected way. Dijkman writes:

During my site-visit to Sharjah I became fascinated by the leaking air conditioning units that 'project' small green oases onto the desert sand. In response, I created a similar situation where individual imaginary 'oases' can be projected. Many film productions use 'Chroma Key' [a.k.a. greenscreen, or bluescreen] backdrops in order to edit actors into animated realities that represent another time and/or space. With two 'Chroma key' interventions in the city, this work encourages consideration of small scale individual future scenarios. Besides their position as site-specific interventions, these installations will function as startingpoints [sic] for participants to imagine themselves in the future. 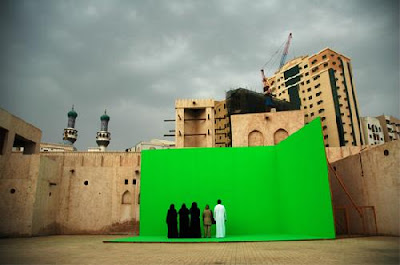 Marjolijn Dijkman, "Wandering Through the Future" (02007)
Photo by Lateefa Maktoum, Dubai
It's hard to tell from the description exactly how this works -- whether people physically encountering the installation are themselves digitally composited into predigested "future" settings, or whether the visual reference to a (by now widely recognised) visual effects technology functions as a symbolic invitation to exercise the imagination by projecting or "compositing", so to speak, our own ideas about the future into the surrounds.

Either way, both the projects described here strike me as aspiring to stage mind-broadening encounters with scenaric possibilities. For which, kudos to Dijkman and collaborators. They gesture in directions that resonate with me, in the first case, by embedding or "camouflaging" the scenario against a real-world backdrop (albeit behind the walls of an art museum, not the most shocking of locations for such an experiment); and in the second case, by installing an unmissable bright-green invitation (out on the street, apparently) to contemplate, and perhaps to challenge, the dark array of 21st-century visions circulating in our culture.

(Thanks to Sally Szwed for passing this on.)
Posted by Stuart Candy at 12:34 pm