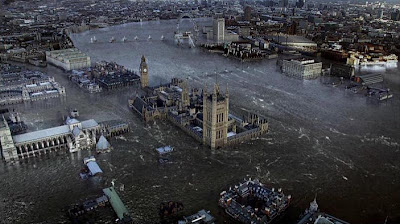 Flood (dir. Tony Mitchell, 02007); image captured from DVD ch. 13
Yesterday, almost a year after my spies in London spotted a BBC News report about its forthcoming release, I got around to watching Flood, a British disaster flick about the inundation of the capital. Not even the usually sterling efforts of star Robert Carlyle (Trainspotting; 28 Weeks Later) could keep this determinedly mediocre movie afloat. (Sample the reviews; and join me in sympathy with whoever kept his name off the list of players at the DVD's Amazon UK listing.)

Arguably the best thing about it, as a film, is the nifty shot of Westminster awash (see above).

However, as a contribution to public discourse on flood risk, the film has possibly done a bit better. Its timeliness in confronting/exploiting one of the bogeymen of climate change has been noted, and its likelihood evaluated (The Times; BBC News Magazine). It also earned an audience of 7.2 million when reincarnated as a TV miniseries two months ago (Brand Republic). A film need not be an artistic masterwork in order to offer a useful contribution to our mental environment. I'm not qualified to do this, but it could be interesting to see an evaluation of how money spent on a movie production compares to expenditure on more orthodox means of bringing issues to public attention (public service announcements, government reports, and the like).

Meanwhile, the flooding of London as a long-term prospect, as opposed to popcorn cataclysm, appears to be trickling into the collective mind. Over at Open the Future, Jamais Cascio has posted on a series of photoshopped visualisations called Flooded London 2090, produced by Squint/Opera, a film and media production studio based in the city. (Thanks to Jake for the tip.) 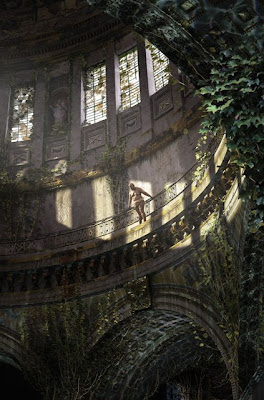 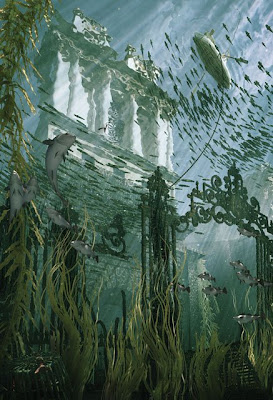 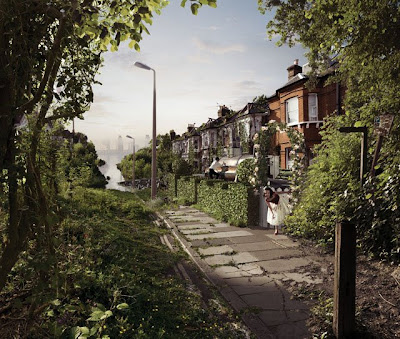 The strikingly attractive images above (disappointingly, there are just five in the set) are now being exhibited as part of the London Festival of Architecture, and so, being nearby, I made my way to the venue this afternoon to take a look. 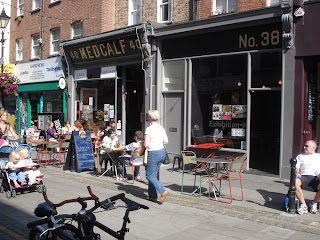 Medcalf gallery, 38 Exmouth Market, Clerkenwell
Photo: the sceptical futuryst
(The details and background of the artwork are, of course, much better appreciated when mounted in large prints on lightboxes than onscreen.) 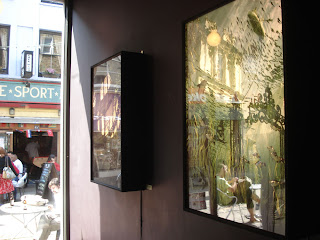 Outside, it's a sunny 02008; inside, an après-déluge 02090
Photo: the sceptical futuryst
From the project description:

The general scenario is set 80 or so years into the future, long after the sea levels have risen. The catastrophe side of the sea coming in has long since past [sic] and the five images are snapshots of people going about their lives, long since having adapted to the worlds [sic] new circumstance. The five scenes shown through lightboxes present London as a tranquil utopia with the architecture of the distant rat race suspended below the water.

It's good to see here what I've previously suggested, following Jim Dator, we need more of; namely, images of futures in which people are adapting responsibly and pleasantly to climate changes which we no longer have the lead-time to avoid; "promoting a range of viable responses -- various different scenarios which all assume global warming, and some of which show us thriving anyway".

Also, it strikes me that this approach could make a marvellous basis for a much larger exhibition, in London or elsewhere -- imagining alternative futures for a whole variety of urban settings, in a sort of Worth1000 challenge for professional artists. Better yet, include original photos of the current locations alongside each set of alternative visual forecasts.

Disaster scenarios are dramatically exciting, and conceptually vital to risk management; but I suspect that without a sense of their (comparatively mundane) non- or post-disaster counterparts, our best intentions will be found dead in the water.
Posted by Stuart Candy at 6:38 pm