How to move to Canada* 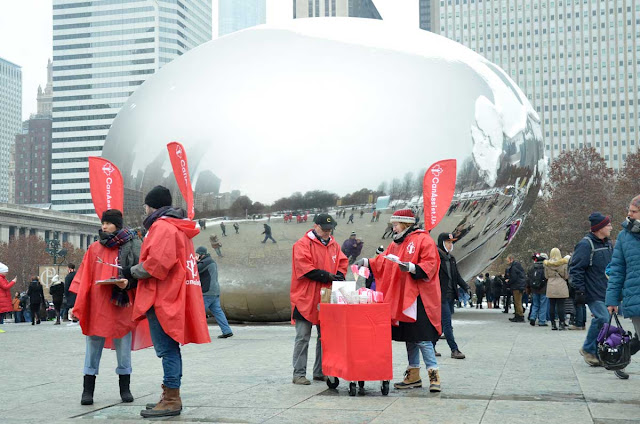 For many progressives in the United States, Canada conjures a wistful ideal of multicultural harmony and civility. After three years in Toronto, followed by six months of electoral madness back in the U.S., I can understand the romanticisation of our neighbour to the north. Indeed, the fact that the Canadian immigration website crashed on election night was interpreted by many as a sign of widespread alarm at the prospect of a Trump administration, an impending reality to which people around the world are now adjusting.

The grass may or may not actually be any greener in the land of moose and maple, but as things take a turn for the disturbing in America, the more utopian the idea of "Canada" becomes in contrast.

This post is about a project created by my students in "American Futures", a special one-off experiential futures course at the School of the Art Institute of Chicago. I designed the curriculum to use the unfolding 02016 U.S. presidential contest as fuel for our collective imagination, and with the election itself taking place a month before semester's end, the culminating efforts of the class were conceived and staged in response to the incoming president's shock victory.

MFA student Cat Bluemke pitched this particular intervention, drawing on her Canadian background to imagine a near-future organisation called CanAssist.Us, and following her lead, the whole class worked together to bring it to life in the streets of Chicago. Below is an email interview with Cat (edited for length and clarity).

What is the premise of this project?

CanAssist.Us is a [hypothetical] private company that helps clients navigate the Canadian immigration system for Americans under President Trump. The project channels the anxieties driving this escapism into critical review of the individual’s responsibility within their community to challenge complacency in this reality. 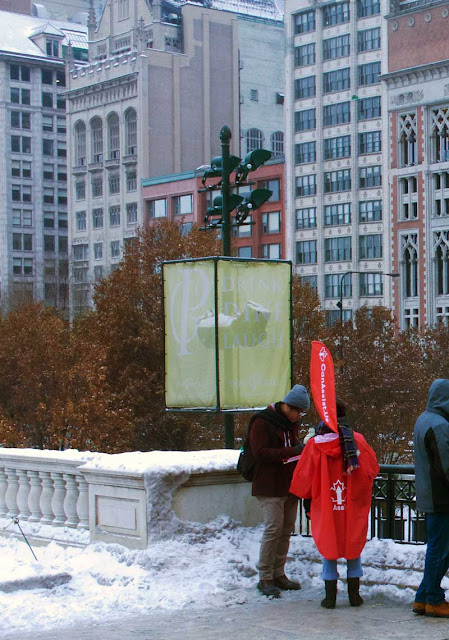 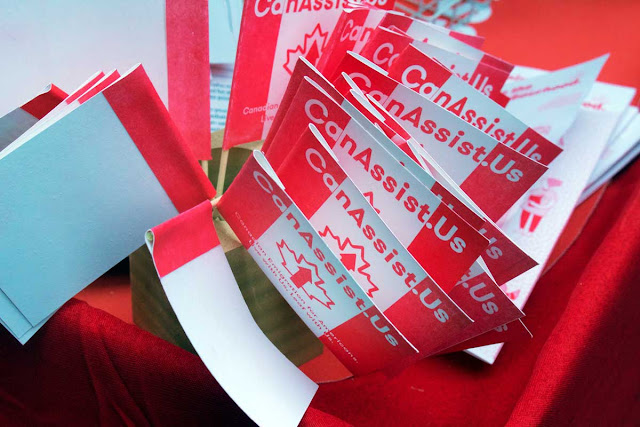 What is the near-future situation you created for people to bring that scenario to life?

The initial ideas for the project were obvious once a few days had passed since the American presidential election results. CanAssist.Us is an absurd but potential reality from a near “post-truth” future (02018, perhaps). Using the familiar form of sidewalk canvassing, the performers offered the ultimate service to "get away from it all".

Once a member of the public engaged, the structure of this American future came into the picture: dehumanising "reform"; life-threatening retraction of health services; and destructive global relations; all promises of a Trump presidency.

[A short questionnaire quickly showed how simply quitting America might not be so straightforward; but to channel people's real concerns productively, and help them manifest the ideal of "Canada" locally,] suggestions for immediate action were presented as workshops the audience could take in their own communities. [These included Multicultural Awareness, Intersectionality, and Anger Management -- as well as popular intensive courses such as Poutine 101.]

How did the public react?

Satire is a great tool for starting a conversation, a united front can exist through a well-structured joke. Structuring that joke to include everyone -- consistent with our urge of a united, intersectional left -- was the difficult part. However, after establishing our position through humour, once we began working with the public, the conversations came easy. The reactions were overwhelmingly positive. 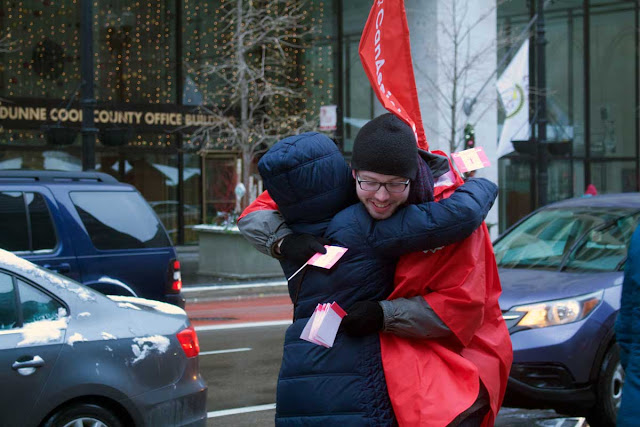 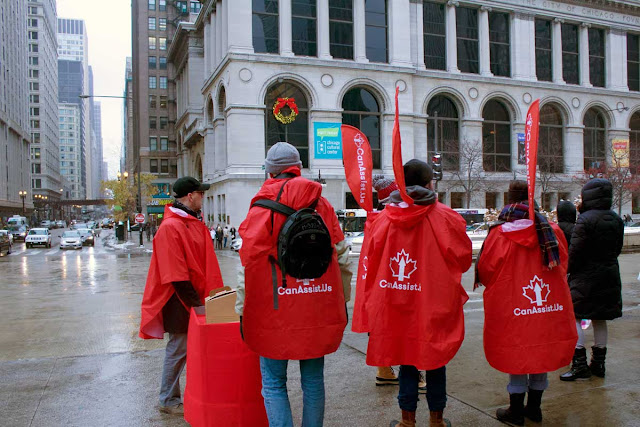 Where does this project sit in relation to other things you've seen that aim to deal with the emerging state of American politics and futures?

The Black Lives Matter movement deserves enormous credit for its accomplishments as a platform for multiple systemic injustices to enter public scrutiny.

CanAssist.Us was more explicitly influenced by artists like Eva and Franco Mattes or the Yes Men, whose public interventions disrupt the complacency that has become the norm.

Where does it sit with respect to projects that you personally have done before?

Both in concept and in execution, CanAssist.Us complements the project Tough Guy Mountain, a group project based out of Toronto, Canada; part art collective, part postcapitalist advertisement agency, and part fantasy table-top RPG.

How does the design of this intervention speak to and work with concerns of the present? How does it make use of the future?

CanAssist.Us uses experiential futures to demonstrate what realities could still be averted, and to encourage the will of the individual to unite under this goal. The situation of our American reality makes the future a particularly urgent tool to engage with.

What challenges did you discover working in a guerrilla futures mode?

I think the whole group could agree that next time, we’d rather guerrilla future on a sunny beach. Jokes aside, the participation of the group members was key in the project, and I’m so thankful that everyone shared in the passion. The kind of improvisation and confidence that is required of a guerrilla futures practitioner is really incredible, but this kind of dedication is desperately needed in order to create a future reality that benefits us all. 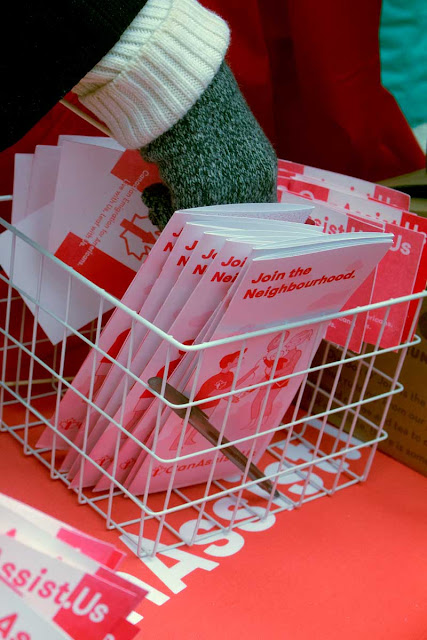 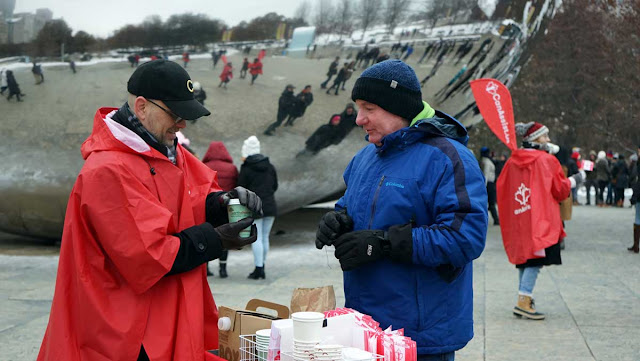 Many thanks to Cat and the whole of the American Futures class for all their creative contributions, and willingness to brave the Windy City winter to enliven public conversation with an experiential flash-forward.

I appreciate this ingenious effort to turn an understandable sense of alarm, and the potential impulse to flee or turn away, into constructive engagement with possibilities for action in our communities today, through exploring what it means to bring "Canada" (code for "a better place") to where we are.

Our thanks also to Jonathan Solomon, Helen Maria Nugent, and office staff in the design department (AIADO) at SAIC for wonderful assistance and support.

And best wishes to all concerned, as this troubling new chapter begins in the grand experiment that is the United States.

Update 01aug17: This project has been recognised at the 02017 Association of Professional Futurists (APF) Student Awards, taking second place in the Alternative Formats category. Congratulations team!

Related:
> Impacting the Social
> Future documentary
> Introduction to Strategic Foresight
> The weight of alternatives
> Stephen Duncombe on the Art of the Impossible
Posted by Stuart Candy at 9:01 pm