An artifact for the future

Fifty to ninety percent of the world's languages are predicted to disappear in the next century, many with little or no significant documentation.
~Rosetta Project website 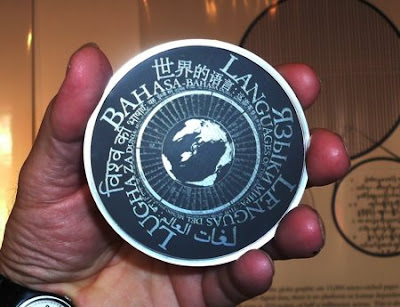 The Long Now's Rosetta Disk | Photo by Kevin Kelly
On Tuesday evening at The Long Now Foundation in San Francisco, we marked a milestone in a project conceived to celebrate and preserve linguistic diversity for the long-term future. It was inspired by the famously trilingual "Rosetta Stone", discovered by Napoleon's troops in 01799 at Rashid (which they referred to as Rosetta) in Egypt, and helped 19th-century linguists decipher hieroglyphic writing.

During a Long Now field trip to a southwest archeological site, the idea of a modern Rosetta Stone came up — a backup of human languages that future generations might cherish. At a winter retreat in 1999 [make that 01999], Long Now board member Doug Carlston [link] suggested that for the parallel common text of this modern Rosetta Stone we should use the book of Genesis, since it was most likely already translated into all languages already. We hatched a plan to produce a 3-inch non-corroding disk which contained at least 1,000 translations of Genesis and other linguistic information about each language.

Following the archiving principle of LOCKS (Lots of Copies Keep ‘em Safe) we would replicate the disk promiscuously and distribute them around the world with built in magnifiers. This project in long term thinking would do two things: it would showcase this new long-term storage technology, and it would give the world a minimal backup of human languages. We thought it might take a year to do.
...
All this took eight years because [at first the] technology could not handle the size of our library, and there was in fact, contrary to our assumptions, no library of already completed Genesis translations. There was no central depository of language information, either. So in order to gather 1,000 translations of Genesis and related linguistic information for those 1,000 language, Long Now created the Rosetta Project. [link]

An earlier version of the disk has since 02004 been hurtling through space on the European Space Agency probe Rosetta, bound for a 02014 rendezvous with a comet where it is to be deposited and will spend the next several hundred million years touring the solar system. The completed Disk unveiled on Tuesday is, however, intended for a terrestrial audience. Kelly:

One side of the disk contains a graphic teaser. The design shows headlines in the eight major languages of the world today spiraling inward in ever-decreasing size till it becomes so small you have trouble reading it, yet the text goes on getting smaller. The sentences announce: "Languages of the World: This is an archive of over 1,500 human languages assembled in the year 02008 C.E. Magnify 1,000 times to find over 13,000 pages of language documentation."
...
The Rosetta disk is not digital. The pages are analog "human-readable" scans of scripts, text, and diagrams. Among the 13,500 scanned pages are 1,500 different language versions of Genesis 1-3, a universal list of the words common for each language, pronunciation guides and so on.

The disk distils and embodies a tremendous amount of effort and dedication on the part of many people. It's a remarkable technical, social and scholarly feat, and a thought-provoking piece of farsighted communication. (The closest parallel that springs to my mind is the 10,000-year nuclear waste warning concepts commissioned by Sandia National Laboratories.) It highlights a facet of futures thinking less frequently addressed (at this blog, at least), which has to do with designing a suitable historical archive (more prosaically, "data storage") for future generations whose specific circumstances are impossible for us to anticipate.

So… if the Rosetta Disk is a prototype and facet of the Library of Ages (companion to the 10,000 Year Clock), what goes into the fine print next?