Dreaming the home of the future 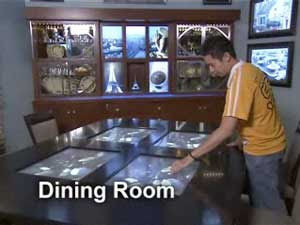 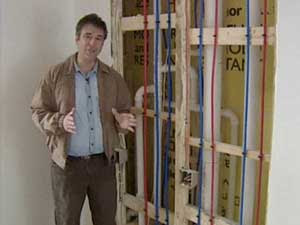 A "House of the Future," a concept of what tomorrow holds for cutting-edge living, usually tells us more about the dreamers than the dream.

In the mid-1950s, Disneyland, with the help of Monsanto, cooked up its "House of the Future," nearly all of it made of plastic... This was pretty radical stuff, but it was also a vision of living in the future that was based on extending our reliance on cheap oil into infinity.
...
This summer Disneyland opened a new version of living in the future in its "Tomorrowland"... Like the Monsanto house of 50 years ago, this latest Dream Home is a big ad.
...
All of our old habits cultivated in a gluttonous energy culture are given free rein in Disney's version of tomorrow. You can't make a move without consuming kilowatts. This Dream McMansion preserves the suburban model that $4-a-gallon gas has made into a nightmare.

If anything, Disney ought to change the story line: "This is how people in the most resource-consuming nation on Earth dreamed they'd still be living in the future without environmental and economic consequences."

There's another Dream Home out there. It hasn't gotten a fraction of the attention lavished on Disneyland, but it offers a future that we might actually be able to live with. Last year the U.S. Department of Housing and Urban Development unveiled its "Concept Home."

The ideas behind the home try to come to terms with the energy mess we're in.

Restated in terms of Dator's generic images of the future, we have in these two houses (Disney's and HUD's) a pretty clear contrast between two embodied future scenario types: "continuation" (business-as-usual) and "discipline" (self-restraint on resources).

I'm very sympathetic to the point that Crosbie, an architect and professor, is making: HUD's so-called PATH (Partnership for Advancing Housing Technology) Concept Home is practicable, sustainable, and ethical in a variety of ways that Disney's immersive advertisement for energy decadence isn't, and yet comparatively, the former seems to have been all but ignored.

What gives? That's a question the Crosbie piece doesn't discuss at all; in other words, why this unjust situation might be so.

Spectacle is our way of making sense of the world. Truth and power belong to those who tell the better story.
...
If we want our ideas to lead and not trail the politics of this country, then we need to learn how to think and communicate in today's spectacular vernacular.

With that in mind, check out their respective websites (PATH; Disney) and take another quick look at the photos above. I know, I know, it's not at all a fair comparison -- the multimillion dollar dream machine going up against the the do-gooding public-private partnership -- but humour me. Words don't cost much to write; let's see how they look side by side. Here are the opening lines of the two projects' press releases:

Omaha, NE -- The U.S. Department of Housing and Urban Development today announced the completion of America's first PATH Concept Home featuring more than 60 efficient, sustainable and flexible products and systems all in one affordable home.

HUD Assistant Secretary Darlene F. Williams speaks prior to the Concept Home ribbon cutting on June 6. She is joined (left to right) by Omaha Mayor Mike Fahey, builder Fernando Pages, and HUD Regional Director Macie Houston."With the PATH Concept Home, HUD has created a blueprint for the future of the American Dream by using innovative housing technologies that support our goals of sustainability, efficiency and flexibility in an affordable home," HUD Assistant Secretary Darlene F. Williams told the gathering of community and industry leaders. "June is National Homeownership Month and we are excited to showcase a home that is affordable to purchase, maintain and renovate as families and their needs change over time."

IT'S THE HOME OF YOUR DREAMS! INNOVENTIONS DREAM HOME INVITES GUESTS TO EXPERIENCE THE FUTURE TODAY

ANAHEIM, Calif. - June 16, 2008 - Imagine a home so perfectly attuned to the needs of a family that it can anticipate and fulfill them, virtually without anyone lifting a finger. Now imagine that the home offers family members high-tech connectivity, not just with one another but with people, entertainment and information in the world at large.

Guests at Disneyland can soon do more than imagine it. Beginning June 17, the Innoventions Dream Home in Tomorrowland is bringing that world to life as a limited number of guests have the opportunity to preview the home.

So here's the Pepsi challenge, kids. Who's telling the better story?

I feel a little bad saying it, but in this light, the attentional gulf separating the pair isn't all that surprising.

And lest I should be accused of overlooking or devaluing it, there is indeed far more substance, thought, rigour and ethical engagement in evidence in the concept home's presentation than in Tomorrowland's pile of eye-candy -- but that's just my point. In America today, the nutritious meal that doesn't taste good doesn't get eaten. (Yeah, thought that was a pretty neat analogy too.)

Between arrogant rejection and populist acceptance of commercial culture lies a third approach: appropriating, co-opting, and, most important, transforming the techniques of spectacular capitalism into tools for social change.
...
The challenge for progressives is to create ethical spectacles.

If Crosbie is right, and the "House of the Future" tells us more about the dreamers than the dream, one of the things it may be telling us about the sustainability-oriented dreamers is that we're still learning to dream aloud in a compelling way. It seems to me that creating ethical spectacles that recast the -- perhaps necessary -- austerities of a "discipline" future as more "dream" than mere "concept" is where it's at, for building futures that are both practically inhabitable and aesthetically appealing.

That's where I'd prefer to live, anyway.

Related posts:
> Today at Tomorrowland: yesterday's future
> Sponsors of Utopia
> If they buy in, are you selling out?
Posted by Stuart Candy at 10:22 pm

Though we can do so much more than in the 50s we have had a dreadful loss of self confidence. There os no actaul reason why the origianl high energy house of tommorrow won't work. There is no real energy crisis it is all a mater of the loss of confidence in nuclear 7 even in exploiting coal & oil reserves in the manner they could do in the 50s.

Still, at least China is not trying to go back to the caves, so humanity has a future.