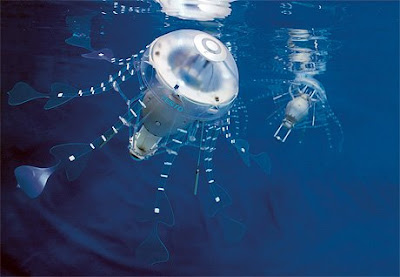 From the gallery at Space Collective
(AquaJelly by Festo)
Space Collective is, according to itself, "Where forward thinking terrestrials exchange ideas and information about the state of the species, their planet and the universe, living the lives of science fiction today."

The site, which is very sleek, highly eclectic, somewhat haphazard, and a little coy about giving you a clear idea up-front of what it's doing, is however explained elsewhere -- by its founder, filmmaker Rene Daalder, in a 02007 interview [rtf] for Volume magazine #10:

Our initial metaphor was to use the Internet to create updates of Carl Sagan’s time capsule on board of Voyager and by the end of each month beam them up into space.

Besides the episodes and the relating meta text, the additional contents of the monthly Payload are generated both by the site's registered members and Space Collective's writers, curators and designers, providing the front page with a blend of public and "native" content, feeding into the site's continuously updated information and entertainment digest, loosely inspired by Sagan’s time capsule.

It's an intriguing concept and, since being launched late last year, with quite a bit of content already, is great to poke around. The impression I get is of a highly literate (in the broadest sense of the term), technologically informed, future-oriented social network. Some nice examples of user-provided content:

> Wild dinners in 2019 (by Wildcat)
Five chow-time vignettes from 11 years into the future, written for IFTF's upcoming alternate reality game Superstruct.
> The world without us: Chernobyl (by A0013237932294)
Featuring some astonishing, unphotoshopped post-apocalypse photos from the still-deserted ex-Soviet nuclear reactor site.
> Summery Books Too Far Out For Johnny Depp (by wilfriedhoujebek):

[A] list of books I can wholeheartedly recommend you to dive into this summer. They are all completely bonkers and they all start from first principles. [...] Only two of them are fiction and this is no coincidence. [...] One can imagine only a few things, one can belief a whole lot more.

As for the site's "official" content, Daalder's monthly video dispatches, gathered under the modest title The Future of Everything, are rather sensationalistic, but have an ambitiously broad thematic sweep, by no means confined to space (so to speak). There are seven posted to date, but no permalink, so to find them visit the homepage, and under "The Future of Everything" click "View all chapters". (Incidentally, as these videos have been pieced together from existing footage, I really like the fact that the clips' sources are referenced in a sidebar at right -- it would be great to see this more often in documentary filmmaking.)

Daalder's bio states "He is currently lecturing at major universities and art schools in America and Europe about The Future of Everything." I'd love to find out more about these lectures, but multiple searches (Daalder + "future of everything" + lecture, lecturing, university, college, school) have yielded a paltry handful of hits, none of them pointing to any transcripts, recordings or even promotional fare. Oh well.