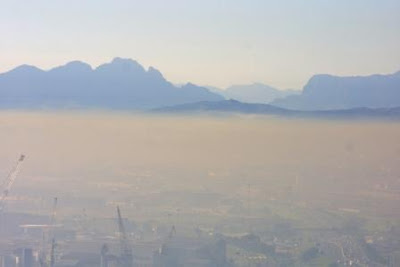 The cloud was creeping higher behind her back, casting a dull murk, not solid enough to be shadow. She could see veils of dirty rain bleeding from its near edge. Earlier, in the city, she had heard sirens, helicopters in the sky; but there were none out here. It was silent. Standing alone on the highway was unnerving. This was for cars. The road surface was not meant to be touched with hands or feet, to be examined too closely or in stillness. The four lanes were so wide. Even the white lines and the gaps between them were much longer than they appeared from the car: the length of her whole body, were she to lie down in the road. She had to stop herself looking over her shoulder, flinching from invisible cars coming up from behind.

It's a tightly written, evocative read (find it in full at The Guardian). A day after the award was announced, Rose-Innes spoke with the Saudi Gazette:

Asked whether she thinks "Poison" taps into the wider anxiety pervading the globe, while having a specific South African context, Rose-Innes replies: "I think it’s in the zeitgeist. There’s a trend towards apocalyptic images in popular culture at the moment...The world is a pretty anxiety-ridden place, although at the time of writing the story it felt like it was very much embedded in the South African situation specifically".

Apocalyptic stories have "a weird attraction; part of me is drawn to the idea of everything being wiped away and starting again anew." She was a fan of science fiction when she was younger and "it’s interesting for me that a lot of those classic science fiction scenarios seem to have been discovered anew by mainstream literary authors."

Now, while the question of whether this story ought to be classified as science fiction sensu stricto may be debated by some, what's more interesting to me is that its success has helped focus attention on the state of the genre in Africa. The story caught my attention because yesterday, flying out west to San Francisco, I got around to reading an article by futurists Sohail Inayatullah and Ivana Milojevic about a very similar topic ("Futures dreaming outside and on the margins of the western world", Futures 35(5), 493-507, June 02003: via IngentaConnect [subscription only]; via Metafuture). The authors make a case for broadening and diversifying science fiction, both in how we understand the application of the term, as well as in the number and variety of cultural perspectives presented through the genre. Through the former line of argument, they suggest that sci-fi equivalents exist in all cultures, even if they aren't visible or appreciated as such; while through the latter, they lament the actual dominance (presumably, in terms of both volume and visibility) of "western" science fiction.

While there is science fiction in all cultures, it is only the west that has systematized science and fiction, made it into an industrial endeavor, and created a particular brand of literature called science fiction. [p. 500]
...
Taking a paradigmatic view, to assert that science fiction exists only in the west is merely to favor one particular form of a much wider endeavor. Science fiction thus should not merely be about the technological as defined in forward time but the creation of plausible future worlds from a range of civilizational perspectives. Science fiction is not just about debating the consequences of scientific progress. It is also about creating utopian or at least eutopian (the good not perfect) societies of
the future. [p. 495]

I can't help thinking that the term science fiction is itself responsible for some confusion here. As I've argued before:

If virtually all future stories, by default, are science-fiction, and popular discourse around future scenarios winds up being coterminous with that designation, then in effect the future has been colonised -- by an instrumentalist, technology-heavy "science" fiction. To put it another way, the narrowness of our culture's thinking about futures is reflected in the paucity of our vocabulary for stories that happen there. It looks like we have science fiction on the one hand, and the venerable literary tradition of utopias (etymologically: "no place") on the other. Which, analytically and practically, pretty much boils down to a choice between technologised nightmare, or nothing at all.

I find myself in agreement, then, with the drive to encourage elaboration and dissemination of alternative imaginaries, as prescribed by Milojevic and Inayatullah, even if I'm a little wary of "science fiction" as a label. The open-ended, pluripotent future with its endless possible settings and interpretations is an ideal place to call eutopian dreams into discussion.

Having said that, "Poison" is no cheerful portrait of a dream-come-true. Thematically, it wouldn't have been out of place in last year's groundbreaking alternate reality game, World Without Oil, which saw players around the world produce stories, in writing as well as other media, imagining the effects of an oil crisis on their lives. Also, with minimal editing, the action could be transposed to any number of other settings in Australia, Britain, or Canada (all places where I've lived) or the U.S. (where I live now).

This may be African science fiction, but the author acknowledges its roots lie in a global mood of apocalyptic anticipation which is grimly plausible almost anywhere.

So, while we may hope to find in African (or other) science fiction some kind of radical antidote to the limits of "Western" imagination; we may find instead that imagination is most appropriately located within individuals-in-a-context, not in monolithic cultures. In the interest of pluralism, I agree that to have many voices is better than to privilege a few. In the massively collaborative process of future-making, the variety of expression, through specific stories, ideas, and possibilities that play into and reinforce (on one hand) or challenge and undermine (on the other) is enormously important. But to be clear: the key question isn't merely whether a sci-fi story is "Western" or not in origin. It's whether (and how) it addresses, be it in endorsement or in dissent, the array of images of the future that we hold in our hearts and minds. I need scarcely add that "we" are many and varied, readers as well as writers.

No one can force anyone to think outside the box they live in, but given the opportunity, the future will irresistibly beckon to some of the people, some of the time, as a horizon of exploration: where today's impossible becomes a different normal.

Consequently, some African sci-fi is sure to look highly familiar. And some won't.

There is always cyclical development.

A nice concept: Africa as cradle of posthumanity.

(Thanks Rachel!)
Posted by Stuart Candy at 2:31 pm