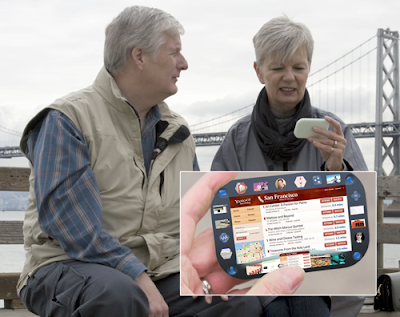 Image: Adaptive Path
Fellow futurist Jamais Cascio recently blogged on working with San Francisco design consultancy Adaptive Path to build scenarios for the future of the web (which can be found here). The end result of that work was a set of concept videos portraying a web browser, dubbed "Aurora", in the year 02018.

The clip above is the second of four illustrating Aurora's use in different settings. (NB The time horizon isn't foregrounded, but watch for a geeky hint in the events menu.) Its development is described in detail at Adaptive Path, and Lead designer Jesse James Garrett helps dispel any possible confusion:

This is not a demonstration of a real product. What you see in the video is a visualization of our ideas created by animators. Technologically, much of Aurora would be difficult or impossible to implement today. However, we expect everything you see to be possible in some form in the future.

The project was instigated by open-source software org Mozilla (makers, among other things, of the Firefox web-browser which I'm using at this moment), as part of Mozilla Labs' Concept Series, which aims "to provoke thought, facilitate discussion, and inspire future design directions for Firefox, the Mozilla project, and the Web as a whole."

The Aurora browser concept video is our first venture into the new world of open source design and, in keeping with both Adaptive Path’s and Mozilla’s core philosophies, we are sharing our insights into the design process and providing much of the original source material. Our hope is that others will be inspired to try their hand and release their own vision of the web browser of 2018.

Mozilla Labs' call for participation, released 4 August 02008, notes that Concepts submitted may take the form of Ideas, Mockups, or working Prototypes, but emphasises that all should be set loose for others to tinker with, via a Creative Commons license (for Ideas and Mockups) or the Mozilla Public License (for Prototypes).

Some viewers may find the explanatory video clips a little contrived (like, um, every instructional video ever made) but regardless of what you think of them, or the specific design features of the Aurora itself, what's exciting to me here is the emergence, and potential, of this mode of collaboration: design thinking and futures thinking coming together in a forum deliberately established on the commons model. It makes an intriguing complement to the Superstruct strategy (noted here yesterday) of crowdsourcing scenario fragments through the medium of a game.

I ended an earlier post about a similarly outward-facing concept project from Adaptive Path (the Charmr) with these words:

Encouragingly, it seems, companies prepared to share their "reimaginings" with the wider world -- preferred futures , in the form of ideal design concepts -- stand to do well, and also to do good, at the same time.

Related posts:
> Public service and self-promotion meet on the adaptive path
> Humans have 23 years to go
Posted by Stuart Candy at 9:47 am