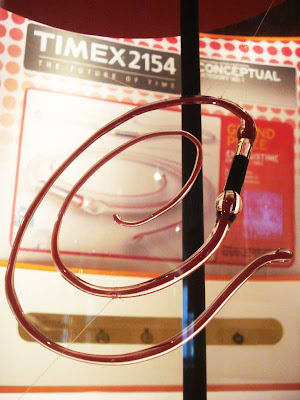 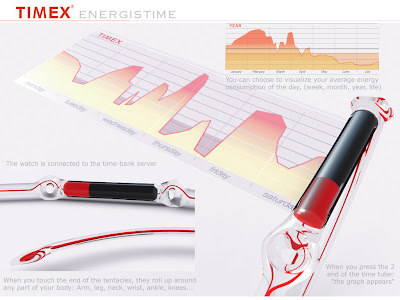 From the competition's design brief:

The essence of time has many interpretations. Some revere time as a regulator, providing context to actions and order to schedules. Others deem it as a checkpoint device that invites accomplishments and permits life to be enjoyed to the fullest extent.

The capture of time is also ripe for investigation. Some people respond to the precision of the digital, while others welcome the tradition of the analog. Some are fascinated with the march of time, while others are liberated by its constant rhythms. Whether too much or too little, most are constantly referencing time's metric, and portioning out attention, energy and lives by its metronome.

Watches in the year 02154. As a basis for a design competition, it's an interesting combination of theoretical contemplation, on the one hand (uh, no pun intended) and commercial savvy on the other (get designers around the world to sketch out some long-range product development ideas, on the cheap). The panel of judges included, notably, Paola Antonelli, MoMA's curator of architecture and design, and the woman behind the exhibition SAFE: Design Takes on Risk (02005) as well as Design and the Elastic Mind (02008), the latter previously blogged here.

So when I learned last week that the company was founded in nearby Waterbury, Connecticut, and that the Timex Museum there (Timexpo) included an exhibition of the winning designs, I had to check it out, and was able to make the journey there Saturday afternoon. 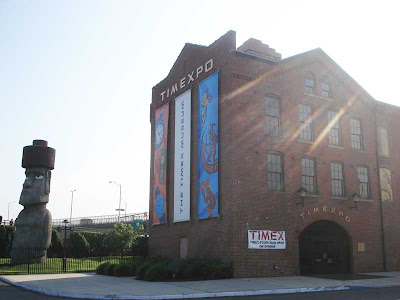 The Timex Museum, Waterbury CT | Photo: the sceptical futuryst
Now, it's not necessary to visit Waterbury in order to see the designs, which have been available online for some time (e.g., blogged at We Make Money Not Art in October 02004). However, one thing that appeals to me is that the winning entries in each of the three categories (wrist-based, wearable and conceptual) have been prototyped in tangible form and are on display at the museum. 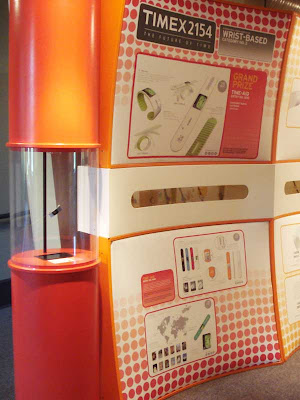 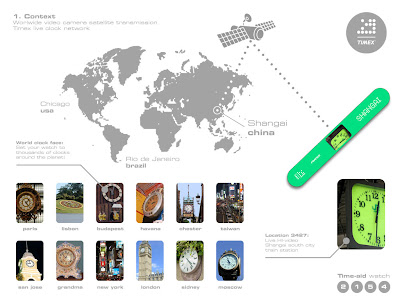 "Time-aid" | Design by Christophe Koch / Lea Kobeli
"Intelligent watch to display all the clock faces around the world." 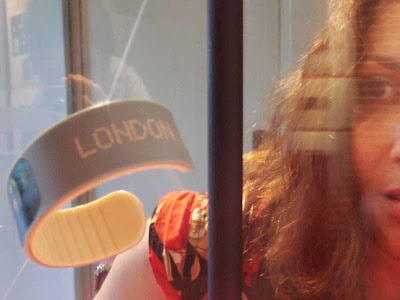 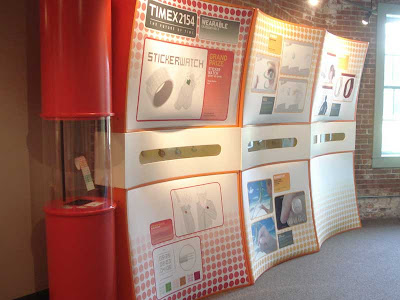 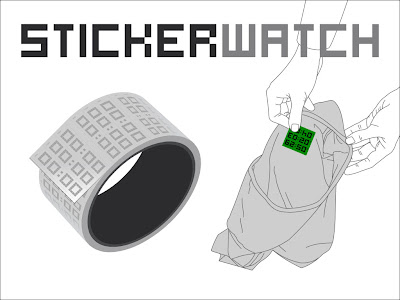 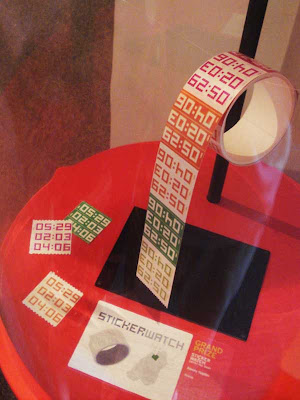 "Sticker Watch" | Photo: the sceptical futuryst
"Notable entries" which didn't earn a place at the museum can be browsed online, and are also worth a look. A couple of examples: 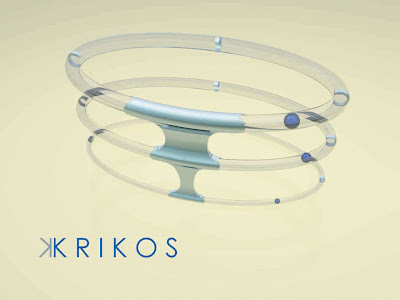 "Krikos" | Timex2154: notable entries (02004)
Design by Breanna Guidotti
"The word Krikos is Greek for circle, a never ending path. [...] Krikos is a way for people to adopt a built in sense of time. As users grow accustomed to the cues Krikos gives them about time they will also take cues from their environment and will acquire the ability to feel time." 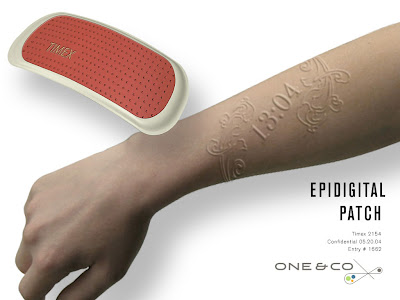 "Epidigital Patch" | Timex2154: notable entries (02004)
Design by One & Company Team
"The epidigital patch leaves the user with an animated topographic timekeeping image on his/her skin. [...] Composed entirely of organic matter, the nanobots dissolve after several days at which point a new patch can be applied."
There's much more to the museum than the Timex2154 entries -- indeed, most of it is history-oriented, but I found it illuminating to learn about the industrial past of the state of Connecticut, to see the home of the phenomenally popular (and ubiquitous even in my childhood) Mickey Mouse Watch [photo] and to find how photography and portable timepieces were used for ingenious cross-promotion in their early days [photo].

But, getting back to the futures: unsurprisingly, many of these concepts do not appear to be grounded in compelling society-level scenarios that would provide plausible in-world parameters. (For in fact the world as we find it shapes industrial design efforts in the present, providing key affordances and constraints that make a product not "plausible", but "useful".) To me, richer and more interesting than the technological marvels presumably enabled by a century and a half of time's passage -- and many of these ideas project, at best, a decade or two into the future, let alone fifteen -- are the possible social shifts which would be embedded and embodied in the artifacts of that distant era.

What would be really shocking is if most people needed or used (other than as a romantic, antique affectation) anything remotely like the quintessentially 20th-century watch in 150 years' time. Already, fewer and fewer of us wear them today, because of the ubiquity of other devices that tell time, and a whole lot else besides. Timex, and other watch manufacturers, must be concerned that their time is running out, and I find myself wondering if that's what prompted the comp in the first place.

At least they were astute enough to abstract from the concept of "watch"; "personal and portable" "timekeeping devices". (From the design brief: "**IMPORTANT** Regardless of category, all entries must embody two key criteria: Personal and Portable. Entries in this competition should examine ways to embody and communicate time on an individual level.") "Future of X" exercises are intrinsically hazardous because they take for granted the continuity of conceptual categories, objects, values and practices which are themselves bound to be subject to important historical shifts. Although I'm always interested in futures concepts which can be physically crafted and thus encountered, I also recognise that artifacts are only a poor proxy for the future -- like the past -- and there is a very great deal about our lifeworlds that simply cannot be conveyed in stuff.
Posted by Stuart Candy at 5:45 pm