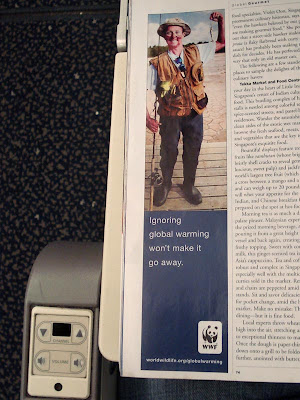 On the last trip I took from Hawaii to the mainland U.S., at the end of February, I took the above snapshot of an ad in the inflight magazine -- airline passengers being a worthy target audience indeed for awareness-raising around the underappreciated risks of fossil fuel consumption. The WWF (World Wildlife Fund, Canada) here uses heavily ironic images to make the point that (as their slogan has it) "Ignoring global warming won't make it go away."

Upon investigation, it turns out there are three images in the print campaign, each based on a photo set in a disastrously disruptive, climate-chaos future where people are carrying on business as usual -- sporting upper lips of almost British levels of stiffness -- regardless: 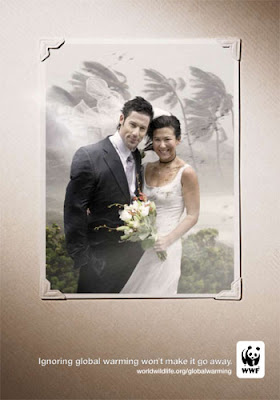 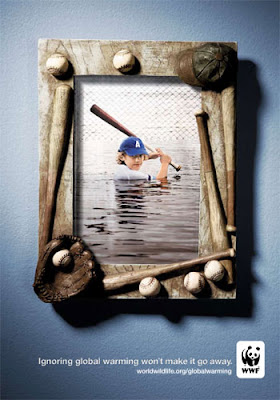 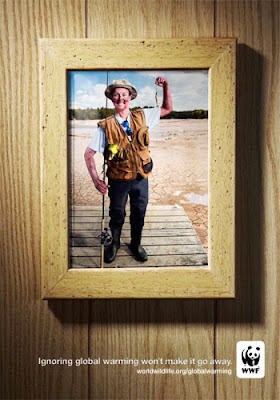 (These compare interestingly with the Diesel "Global Warming Ready" fashion ads seen here not long ago.)

There's also a TV spot along the same lines (via glossy):

Insight into the purpose of the campaign -- launched back in late 02006, although my own encounter with a current print ad was just a couple of months ago -- comes from a Canadian marketing and advertising industry magazine:

WWF posted the spot on YouTube with a call-to-action to participate in a Toronto-area event last month. The post attracted dozens of comments from interested users, and at least 5,000 people showed up to the demo. At press time, the YouTube posting was averaging 1,000 views a day.

The campaign, which also includes OOH, print, radio and a microsite, www.saveourclimate.ca, aims to broaden the WWF's image from simply an animal rights group to that of a "world security guard" of sorts, says [copywriter Chris] Taciuk. It's running across English-speaking Canada in donated media space.

It's enlightening to find that the goal here is not simply to promote issue awareness, but also to signal the Swiss-founded WWF's interest in ecological concerns beyond just wildlife (since 01986, outside North America, WWF's official name has been the less issue-specific World Wide Fund for Nature). Layers.

I also find myself pondering this use of grim futures imagery in pursuit of the duties of a "world security guard", for two reasons. First, that's an intriguing and somewhat unsettling phrase -- though perhaps not officially a label the organisation itself would use? Second, as regular readers may have anticipated, I'm curious about the substantive strategy here, which entails questions about what kind of impact on people's thinking and behaviour are sought or anticipated by WWF, as a result of such an intervention. There's a copy of the same clip on YouTube -- although note that the "glossy" version posted above has better audio -- with 1,068 views, but only one comment, from user "rhode74", which from an eco-activist standpoint seems almost too good to be true:

I saw this commercial the other night while I was using my hair dryer.

I couldn't understand what was going on at first since I couldn't hear it. But after seeing the hurricane; then the firestorm; I shut off my hair dryer and heard Mr.Rogers' song, "Please won't you be my neighbor".

Then I saw, "Ignoring Global Warming won't make it go away"

That had an impact on me.

I will now try to recycle what I have.

Call me sceptical, but to me it's a safe bet that meanwhile, others saw the clip, noted that was a WWF joint, thought to themselves "hippie fuckers", and went back to clubbing baby seals with renewed vigour -- buoyed by a fresh wave of contempt for what they might (were they to pause momentarily, exchange club for pen, and commit an opinion to writing) describe as the outlandish fantasies of conservationist ideologues.

Some people dismiss An Inconvenient Truth because they don't like Al Gore.

However much good faith is brought to one's position, single-minded advocacy in the face of uncertainty (a tendency closely related to monofuturism) is all too easily caricatured and ignored. The habit of thinking in alternative futures cultivates simultaneous consideration of divergent lines of scenaric logic side by side.

I'm not arguing for considering "alternative" futures in which global warming doesn't hit. Quite the opposite. I'm suggesting that this style of advertising -- parodying denial -- may not win over many new converts. Instead, promoting a range of viable responses -- various different scenarios which all assume global warming, and some of which show us thriving anyway -- may now be a more powerful strategy.
Posted by Stuart Candy at 2:53 am

Also of note from WWF Canada: a site-specific billboard/installation that uses an awning and the movement of its shadow to suggest sea level rise: watch the video.

This is a really clever idea. It does get me wondering, though... At another post of the same clip,
"cwegscheid" comments:

I don't think this is real, is it? A rough computer simulation, maybe? The shadow wouldn't "rise throughout the day": it would lower until noon, and then rise. Also, unless the sign were located on - and perpendicular to - the equator, the shadow would travel across the billboard (matching the changing azimuth of the sun), not straight up.

The comeback to that, I suppose, is that it could be right and yet it wouldn't matter. The video's main function can be considered its viral life online (there have been over 60,000 total views logged between those two YouTube posts alone, and it probably appears elsewhere, too). We could be looking at a complete simulation, or carefully selected footage of a real installation whose illusion only works half the time. In the latter case, the billboard could have been up for as little as half a day, and it wouldn't affect the video/online experience, which is where the vast majority of this piece's possible audience resides.

I saw the first photo (of the sunburned man with the fish) in my neighbourhood shortly after returning from Europe last summer and immediately thought of you at the time (though didn't take a picture...heh). Notably for me, it was on a billboard affixed to a public combination waste/recycling receptacle, though I am certain this wasn't intentional. Thought it was a little hokey at the time, but agree with your central point: catastrophe is poorly understood and easily ignored; major shifts in how we would otherwise go about living the same old way (if that makes sense) could be far more impactful.