This month, Wired magazine online includes a cute take on a newspaper of the future -- focusing on a U.S. election sixteen years hence -- dated 22 November 02024. 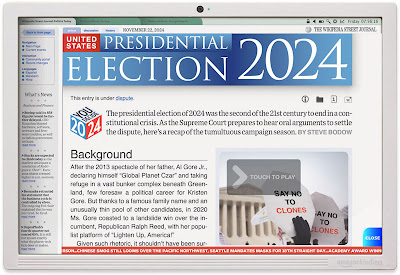 Screenshot of an interactive design by officevsoffice
From Wired 16.03 | Copy by Steve Bodow

It's an interactive Flash design, so you need to click through to the original to check it out properly...

Well, ok. I don't know why I'm not more enthusiastic about this: I'd really expect to like it more than I do. It's a future artifact, cleverly thought out, detailed, layered, with a lot of witty morsels to savour... So far, so good.

But as a futures artifact, maybe it tries to do too much. It's not that it isn't thoughtful, or clever, or satirically on-target -- it just, to my (undoubtedly hypercritical) mind, goes overboard. So densely packed is it, so thoroughly burdened with pop culture asides, news satire, tech-savvy smirks, and post-everything ironic wit that frankly it's a little tiresome.

An aspect of this density, clever and confusing at the same time, is the way it plays on multiple layers simultaneously. We're getting jokes about news content (including celebrities, journalists, international crises, American politics) as well as physical medium (the -- in 02008 -- newly minted wireless reading devices; platform convergence including the integration of CNN-like newsbar, and webpage elements like photo sets and vlogs); as well as the written form (quirks of the Wikipedia relating to its dubious contents; the ironic combination of user-produced content and the Wall Street Journal!) Ha! And presented on a later version of the Amazon Kindle -- clever! Ugggghhh. Et cetera. I give in. What's for dinner?

So much is going on here that I'm sure there's a bunch of jokes I simply missed. Which is fine. Much contemporary comedy, and The Simpsons really broke the mould here, relies on an abundance of layers to laugh at, from slapstick and sight gags through to highbrow political and historical references. But that kick-'em-while-they're-down strategy doesn't necessarily translate directly to webpages and flash animations. Unlike a medium with duration (such as video, or live performance) our attention seems to be assaulted all at once, not in sequence. And -- perhaps this is the laugh killer, or indeed the metajoke -- this flash design is a pain to navigate.

Now of course, I'm looking at this through my own biased, persnickety criteria. And this piece is, I concede, principally satire, not futures. Despite the resonance of those two that I thought about here not long ago, there may be a tension that I can't articulate yet between good satire and good futures work. You decide how well this particular example succeeds on each front. But I'll say one more thing about the futures aspect before the tirade subsides.

It's head writer of The Daily Show (a program I much admire) Steve Bodow who "lays out the scenario" here. But through all the clutter I have trouble discerning the scenario. It seems like almost everything that's happening today is still happening in this future, only more so. Which seems to amount to more noise than signal. I suppose that's its intention. Maybe it's too close to the apparently ubiquitous trend for comfort -- hypercomplexity and massively dense referentiality may ring too true to be really funny to me. I guess a simpler scenario would have been easier to follow, but funnier? I don't know.

With this, I betray my simplemindedness and raise a talking point for future future artifacts -- less can be more.
Posted by Stuart Candy at 3:48 am

I was going to leave a comment about the Virgle blog above, but then ventured upon this one. You bring up a good point about the things that are happening now seem as though they are occurring in the future Bodow portrays. To me "hypercomplexity and massively dense referentiality" somewhat dilute the message, lessening the impact. Somehow the relevance is muddled by the semiotics referencing our current events? Anyway, I enjoyed reading your blog and thanks for your card and info about "Aiglatson Institute". Futures is a creative and intriguing field. We should definitely hang. I'd like to learn more about the futures madness.

Hey Rujunko, thanks for stopping by.

I'd be happy to talk with you more about the futures madness -- one of my favourite kinds.

I was amused by your response to this newspaper from the future. I took a look, was quickly overwhelmed, and, after a quick, up-close scan around the whole page, left feeling like I hadn't gotten anything out of it (which is also undoubtedly a fault of mine as well and the little time and effort I put into it). Nonetheless, I was not drawn in but rather was left running in the opposite direction and even questioned whether I was too overwhelmed to read what you had to say about it :)

So you can imagine my amusement at seeing the similarity in our responses :) Thanks for sharing. By the way, what's persnickety?