Speaking of pregnant dudes, here's an ad for vodka: 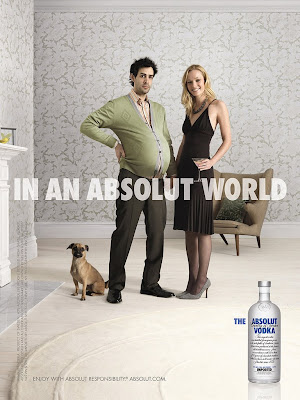 Image via HalfDay
Huh? No, it doesn't really make sense to me either. The general idea seems to be that after 25 years of the same campaign, "Absolut [witticism]", the Swedish brand wanted to reinvent itself. Old vodka, new bottles? No: same vodka, same bottles... different ads. As this New York Times article explains, it made a switch back in 02006, and a year later tried something else again, alighting on the current strategy:

Drinkers are invited to imbibe "in an Absolut World," a fanciful, even surreal, place where common sense prevails and just deserts are always on the menu.

On Planet Absolut, for instance, men can get pregnant, the Curse of the Billy Goat is lifted from the hapless Chicago Cubs and the garish billboards in Times Square are replaced by masterpiece paintings. Lying leaders are exposed by their Pinocchio noses, protesters and the police wage street fights with feather pillows, nice Manhattan apartments cost $300 a month and it takes only one exercise lap in a pool for a fatty to become a hottie.

This effort has been running across a range of media for over a year now, and at the company website you can submit your own ideas about what for you would constitute an "Absolut world" and seek to have them realised visually (most are somewhat dull, I found). However, the campaign has recently garnered quite a bit of attention for this: 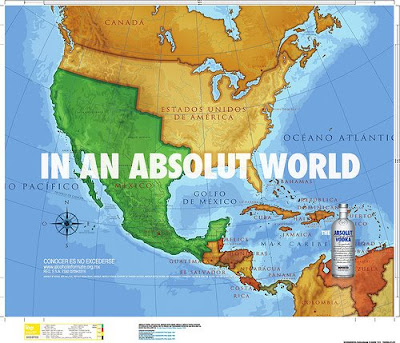 Image via LA Plaza [LA Times]
I found the campaign via a recent Reason magazine article, which explains:

In early March, Absolut ran an ad in Mexican magazines as part of its "In an Absolut World" campaign. The ad featured a map of North America from the 1830s, when Mexico still controlled great portions of land it eventually coughed up one way or another to the United States. If the real world were as perfect as it sometimes seems when you're smashed on vodka, Absolut suggested coyly, the Dallas Cowboys would be Mexico's team, not America's, and the Beach Boys would've had to settle for Nebraska girls.
[...]
The controversial Absolut ads crossed the Rio Grande via the Internet, and U.S. bloggers with anti-immigration leanings, already sensitive to the idea of being undermined by an army of dishwashers and day laborers, demanded a boycottini.

It's amazing what gets people riled. Of course, the company must been aware this could happen, which puts an interesting spin on the not-quite-an-apology blog post at the company website:

This particular ad, which ran in Mexico, was based upon historical perspectives and was created with a Mexican sensibility. In no way was this meant to offend or disparage, nor does it advocate an altering of borders, nor does it lend support to any anti-American sentiment, nor does it reflect immigration issues. Instead, it hearkens to a time which the population of Mexico may feel was more ideal.

As a global company, we recognize that people in different parts of the world may lend different perspectives or interpret our ads in a different way than was intended in that market. Obviously, this ad was run in Mexico, and not the US -- that ad might have been very different.

As I type, there are 3,384 comments to this post; quite a few of which aggressively express, shall we say, Absolut disappointment.

Let this be a lesson to companies being cavalier about riding into chauvinist country. (But it ought to be said, if this is seriously disturbing to that many people, the ad is not the problem.)

Some of the series do contain moderately interesting ideas... 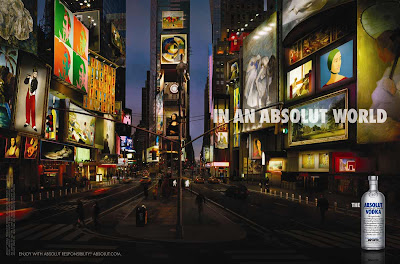 Image via Duncan's Print
...such as works of art replacing premium advertising space in public -- ironic, isn't it?... 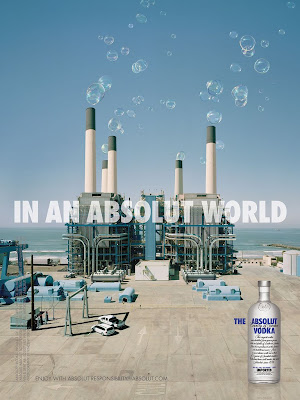 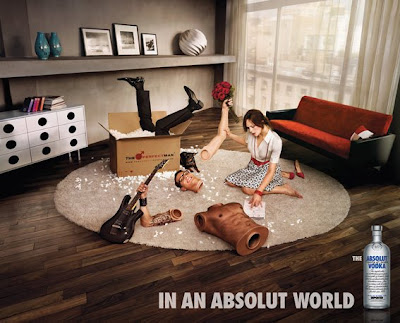 Image via Advert-Eyes
...kits to assemble "The Perfect Man"... 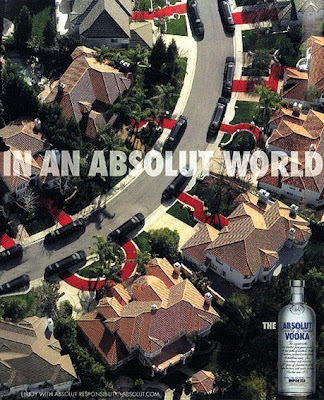 Image via Advert-Eyes
...and ubiquitous limos, mansions and red carpets. You know what? -- bring back the wafer-thin pandering to Mexican nationalism.

(There are plenty more -- try here if you haven't had enough yet.)

So, I should come clean: I've always enjoyed advertising. At age seven I remember setting up a cassette player in front of the television, and recording the ad breaks (why I didn't just use videotape, I'll ask my seven year old self first chance I get). Years later I see part of the attraction was that many of the best communicators in the world ply that trade, and make a handsome living at it. But I remember deciding years ago against being a copywriter, because -- like a diplomat -- your messages aren't really your own. This to me is a significant problem with much corporate imagery. Its coherence and integrity are always at risk, because the bottom line is the bottom line, and where that competes with the more profound things -- like engaging people in a thoughtful process of articulating their preferred world -- you get throwaway gags. Seriously; there's the signature of a frustrated idealist in the design of this campaign: "We believe everyone's a visionary" (quote from the animated intro).

I don't mean to say I think a lot of this isn't good artwork, or conceptually worthy up to a point -- it really is, and in a different setting, each of these images would qualify as nifty art. (The "Perfect Man" kit compares well with any of Wired's recent artifacts from the future.) But the advertising context cheapens it. This is not an anti-corporate argument, exactly, it's just my take on an observed lack of integrity that frequently emanates from this sector, and other quarters too.

Perhaps a more subtle association with the brand would have been interesting: make people work for it a little bit, draw their own connections. Minimise the Absolut bottle and slogan, even hide it altogether. Let these visions in all their odd extremeness -- if such be the aim -- speak for themselves. Such an approach might have appeared less like a corporate endorsement of any particular eccentric possibility, and more like of a platform for others to speak, which seems to be the vibe they were after.

But that's all trying to redeem something irredeemable, in the sense that what this really makes me long for is a compelling multimedia conversation about alternative futures (sure, including fantasies, why not?) that isn't sponsored by an alcoholic beverage. The way things stand, instead of a platform for crafting and negotiating visions of the future, you get a weird hodgepodge of fantastical, cartoonish, utopian, and casually offensive ideas all whispering "buy this". I know, I know: they're trying to sell vodka, not change the world. But that's exactly my point: this is the forum, and the form, in which our ideals are being discussed, and -- even more so -- neglected. (Our political process, for the most part, refuses to touch them.) That's not the company's fault -- I'm saying that if we had a healthy discourse about our ideals, this discursive space about the ideal would not be a mere blank for the vodka merchants to fill in.

At any rate, if there's anything to take away from the Mexico ad, and its comically irresponsible fiddling with the heartstrings of U.S. patriots, it could well be this: We are entitled to query the motives of advertisers, and when they fall short in any way whatsoever, to make obscene anonymous threats at their websites.

It's our Absolut right as consumers.

And by the way, in my ideal world, all that vodka would be turned into single malt scotch.
Posted by Stuart Candy at 7:20 am

I usually enjoy your posts unreservedly, but I'm not sure that being disappointed in the motives of advertisers entitles the aggrieved person to "make obscene anonymous threats at their websites."

I much prefer the power of logic, humour or gentle public ridicule.

Hi, thanks for stopping by.

I agree with you. My comment was intended to be an ironic jab at the ludicrous immaturity of resorting to obscene threats rather than, as you suggest, logic, humour or ridicule.

Too subtle, evidently. My bad.