An excellent article in the New York Times Magazine last weekend profiled Jan Chipchase, a "human-behaviour researcher" for Finnish cellphone manufacturer Nokia, who travels the world looking at how people use, and could in the future use, the company's products...

This sort of on-the-ground intelligence-gathering is central to what’s known as human-centered design, a business-world niche that has become especially important to ultracompetitive high-tech companies trying to figure out how to write software, design laptops or build cellphones that people find useful and unintimidating and will thus spend money on. Several companies, including Intel, Motorola and Microsoft, employ trained anthropologists to study potential customers, while Nokia’s researchers, including Chipchase, more often have degrees in design. Rather than sending someone like Chipchase to Vietnam or India as an emissary for the company — loaded with products and pitch lines, as a marketer might be — the idea is to reverse it, to have Chipchase, a patently good listener, act as an emissary for people like the barber or the shoe-shop owner’s wife, enlightening the company through written reports and PowerPoint presentations on how they live and what they’re likely to need from a cellphone, allowing that to inform its design.

The premise of the work is simple — get to know your potential customers as well as possible before you make a product for them.


Observation and conversation are certainly ways of getting to know your potential customers.

Another approach is to climb inside their bodies. This week, there appeared a report of an intriguing approach to designing vehicles for the elderly. With Japan's ageing population comes increasing incentive for businesses to anticipate the special needs of that demographic. 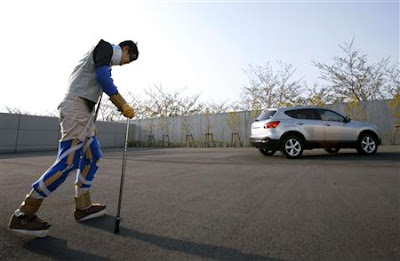 Associate chief designer Etsuhiro Watanabe says the suit's weight and constriction help in determining functionality and accessibility within cars by putting young designers not only in the minds of the mobility-challenged, but also in their bodies.

"Difficulty in walking, back pains, trouble in lifting arms -- we wanted to consider assorted infirmities," said Watanabe of the concept known as universal design.
[...]
An ageing suit was first used by Nissan a decade ago, while Japanese washlet maker Toto uses such suits to simulate bathroom mobility, even including tub water as part of the program.

Launched in a rapidly graying nation where over 40 percent of the population is expected to be over 65 age by mid-century, the design strategy also aims to find traction abroad.

Over 40 percent of Nissan's Japanese and U.S. sales are to customers over 50 years old, according to the company.


This story serves as an interesting counterpoint to the "prosthetic intuition" device blogged here a few days ago. The old suit could be considered another instance of "embodied foresight" -- wearing, rather than merely thinking, what your future may hold. The simulation condition of the suit is negatively oriented -- assuming that impairment and decrepitude comes with senescence, which, one might think, could change as medical treatments and lifestyles evolve -- but the pessimistic approach makes good sense because the goal is "universal" design; stretching to meet drivers at the needier end of the user spectrum.

There are limits, of course, to how far we can walk in another's slippers, so to speak, even with relatively simple questions of mobility... but it makes wonder what other uses suits along these lines could have. Simulated weight gain to encourage more responsible eating habits?

Tangent: the late writer and master satirist Kurt Vonnegut once wrote a short story called "Harrison Bergeron", set in 02081, about an America in which physical and mental equality across the population was sought by systematically handicapping anyone with gifts exceeding the lowest common denominator. Although the "handicap bags" in that grim satire are aimed at obliterating differences in ability, rather than accommodating them... Whatever. Read Vonnegut.

(Thanks Dad for the Nissan story, and Leo for the NY Times tip.)
Posted by Stuart Candy at 5:40 pm