Design fiction is a fact

For the past two weeks, the intro to politics class I'm lecturing at UH-Manoa this semester has been doing a public art project generating artifacts from the future jointly with a digital imaging class.

I briefed my students to keep an eye out for interesting visuals along these lines, and last week one of them forwarded me a chain email he'd received which seemed to fit the bill. It's reproduced below (original spelling, etc):

You will not be able to know what is ahead of you, until you have seen at least 4 pictures and read the explanation of what they are,our future is here ,incredible!! what an age we live in.
(Kind of scary, in a way) 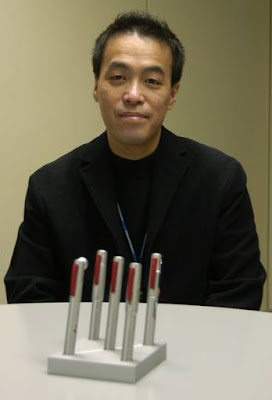 Look closely and guess what they could be... 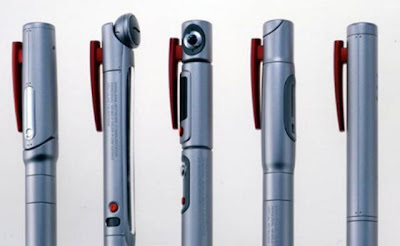 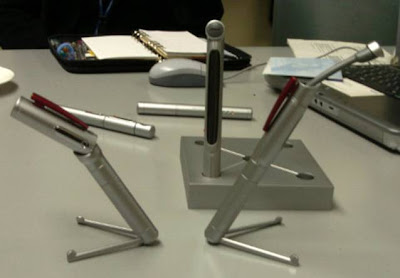 Any wild guesses? No clue yet?

You've just seen something that will replace your PC in the near future.

Here is how it works: 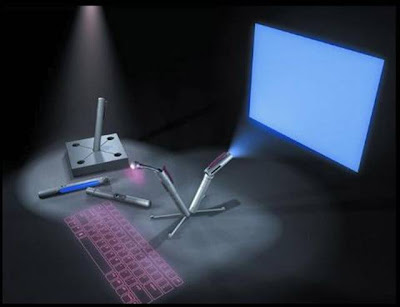 In the revolution of miniature computers, scientists have made great developments with bluetooth technology...

This is the forthcoming computers you can carry within your pockets. 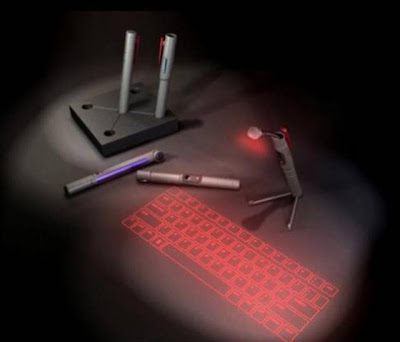 This 'pen sort of instrument' produces both the monitor as well as the keyboard on any flat surfaces from where you can carry out functions you would normally do on your desktop computer. 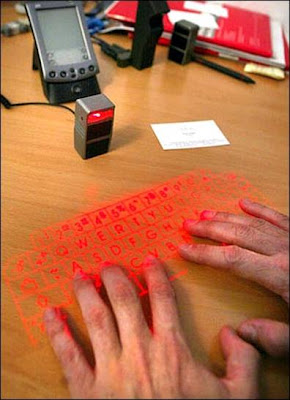 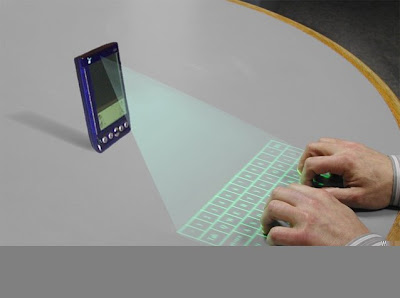 Can anyone say, 'Good-bye laptops!'
Looks like our computers are out of date... again!!!

Seeking a source for this unlikely bit of breaking news, I found an entry on Snopes, the "Urban Legends Reference Pages", which alternately validate or debunk Internet rumours. Their entry on this ("Pensonal Computer", a pun so bad, it's almost good) features an email archived at the site more than two years ago, with exactly the same sequence of photos as above, and almost identical text.

The Snopes verdict on the claim in question ("Photographs show a conceptual pen-sized personal computer system") is "Partly true". They refer to Japanese technology company NEC's 02003 trade show presentation of the concept, which is called P-ISM (huh?). See this technology briefing in WAVE, dated 20 February 02004, where most of the above images appear. As Snopes points out, the last two have been appropriated from somewhere else, which adds somewhat to the confusion.

Now, apart from the oddly anachronistic carnival sideshow tone to the email -- step right up, marvel at the amazing bearded lady, and the fabulous pensonal computers carried within her pockets! -- the other thing that's strange to me here is that, in such a fast-moving arena of innovation, the same ideas and images are bouncing around the Net four or five years after their first appearance. I'm not just referring to the chain email from my student -- which, like any meme worth its salt, clearly has a sort of electronic bottom-feeder's life of its own -- but at the time of writing, I can find the P-ISM (with the natty subtitle, "A Pen-style Personal Networking Gadget Package") and the same illustrations, featured together with other concept designs -- "not planned to be commercialized at this point" -- at NEC's website. They're under the heading Resonantware: "Next Generation Ubiquitous Networking Devices Visualized By Designers". Others include the "gumi" -- edible, gummy-coated RF-ID chips containing usage rights to images and music; the malleable communication device "tag" (which looks a lot like the Morph); and the "dew" Life Recording Interface (which appeared in PC Mag's 25th anniversary feature on "Future Concept Designs" in January 02008).

In recent months, in pursuit of future artifacts and an understanding of what makes them tick, we seem to have stumbled into a design twilight zone where notion, concept in development, prototype and fully-fledged gizmo are all fluidly in play (and at work) in the ideascape. A few posts ago, I thought aloud as follows:

With increasing numbers of people turning increasingly sophisticated (CG-enabled) design ideas loose in the mediascape, in some settings, the virtual (or hypothetical, or future) artifact and the real one have become exceedingly difficult to tell apart. Playful design concepts like the iRing [link] seem to appear more and more often in my meanderings around the web. Real or not? At a glance, there's no way to tell.

Even on closer inspection, the development -- or, if you prefer the philosophical take, ontological -- status of many gadgets is ambiguous, which for me highlights the interesting and complex state of affairs in which our technoculture finds itself, stewing in a semi-concrete imaginary technobubble. It's a bit trippy. It also brings home with some force, I think, proto-futurist Fred Polak's point (which serves, more or less, as the starting assumption for the field of futures studies) that the images of the futures that we entertain are the key ingredient in the future our culture creates. In the technology domain, all manner of bits and pieces of possible futures hang around -- increasingly well-dressed -- waiting to be transmogrified from concept to reality. But that transition is a difficult one to track.

In that same post recalled a moment ago, I also cited Bruce Sterling's use of the term "design fiction", which I think may describe this whole nebulous genre rather well, including concept designs (and concept videos), hypothetical products, future artifacts, and visual depictions of alternative futures (venturing finally beyond the gadgetry to evoke more of the technocultural/scenaric context).

So: the "fictions" -- a word with weight, seen from here -- that we entertain, and that entertain us, however well-designed or ill-conceived, are social facts which serve in no small way as drivers of the world we co-create. These ideas matter, and they appear to lead lives of their own. Here, then, I want to call for design fiction that ranges beyond the playful next generation gizmo, and ventures gamely into the further reaches of yet-to-be-lived experience; the communities and myths, rituals and habits, heavens and hells of tomorrow's Joe and Josephine Sixpack.

Well, I know that's a tall order. But the students in my class, most of them in their first year of university, are currently grappling with the beginnings of it, crafting interventions to speak alternative futures (set in 02038) through public art installations. Stay tuned for more on their efforts, and let's see what we can see about expanding the horizons of the imaginable.

(Thanks for the email, Shane!)
Posted by Stuart Candy at 5:10 am