It's a small world, after all

To these recent posts about envisaging end-of-the-world ("after all") type scenarios, we can add the work of Lori Nix, who makes miniature dioramas of grim, sometimes amusing scenes, and takes pictures of them. It's The World Without Us, writ small... 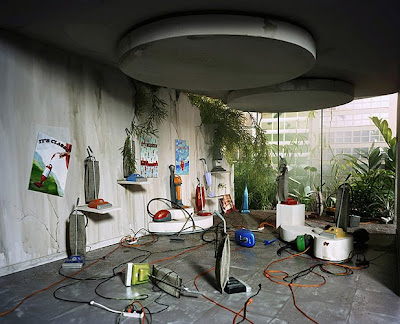 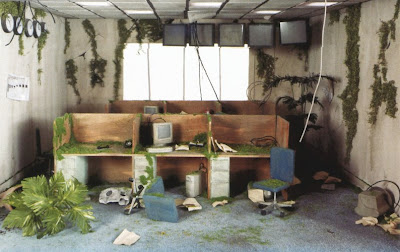 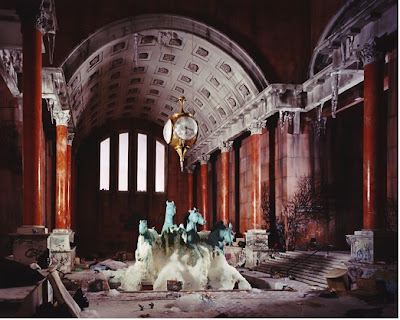 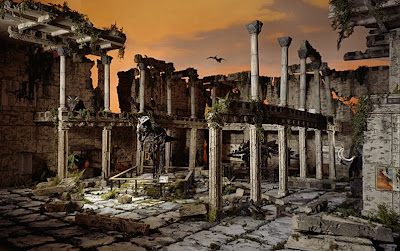 Blockbuster special effects a lá Day After Tomorrow are awesome — even that silly ice-encased Statue of Liberty — but you don't need $100 million to plausibly depict post-apocalyptic ruin. Case in point: the unsettling dioramas photographer Lori Nix constructs out of materials like wood, buckwheat flour, insulation foam, and acrylic gel. In her series The City, she imagines abandoned municipal settings where nature is taking its ineluctable revenge.
[...]
As a photographer, Nix has very traditional methods; none of her work is done digitally, and she even prints her own photos in a color lab.

Q: The newer stuff seems to have less obvious humor than the earlier work and some of the scenes, even though they are incredibly beautiful, are also feel very "it's the end of the world." Can you talk about that progression?

A: There are still humorous things, but they're more tucked away. It's not quite so obvious. I started the whole model thing while I was living in Ohio, and then I transplanted myself to New York eight years ago. I'm getting older and life is getting harder. I think I have less of a carefree spirit. I have worry about bigger things, like bills and money. I think my whole nature is turning a little darker, just from living in an urban environment. I also think that I’m getting more mature in my work and taking bigger risks—wanting to do more grand–scale scenes. I think that if I transplanted myself back to the Midwest, the scenes would become more simplistic again, because I really feed off of my environment. I think just being in the city, I'm more interested in architecture and I'm seeing it everywhere I turn.

Finally, a word or two from the artist's website:

Lori Nix is an artist who bends the line between truth and illusion in her photographs. She accomplishes this by photographing miniatures and models which illuminate her interest in the disaster movies of the 1970s and her memories of growing up in Kansas—a place that seems to attract disasters like no other.
[...]
In her most recent work, Nix has left Kansas behind as a subject, and, although depictions of disaster are still prominent in this new work, she has begun to explore situations that are as eerie and ominous as her former work was clear and present. This new work is charged with anxiety and uncertainty as witnesses to her previous disasters have become bystanders waiting for something to happen.

I much prefer the decay of intimate, mundane stuff that we're not used to associating with apocalypse (the top two of the images above are my favourites in this line). Somehow, portrayals of crumbling public buildings of the library-and-museum genre seem a bit obvious.

Nix's other work, while not set in a grandly posthuman future, is imbued with a similar melancholy. It's great stuff, in a surprisingly eloquent medium. 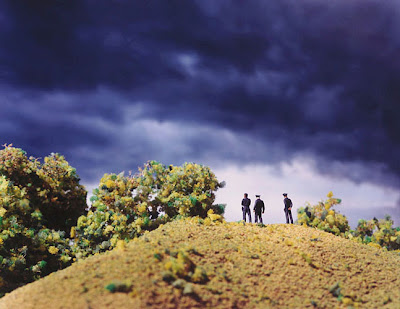 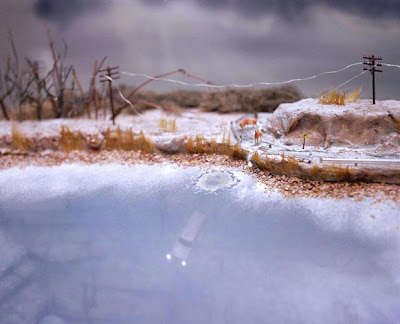