This evening I was reading an article in Harper's Magazine from February 02008, "The Next Bubble: Priming the markets for tomorrow's big crash", by Eric Janszen.

Then I saw this ad on the back cover: 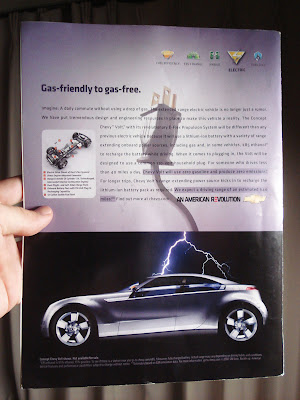 Imagine: A daily commute without using a drop of gas.* The extended-range electric vehicle is no longer just a rumor. We have put tremendous design and engineering resources in place to make this vehicle a reality.

However, the fine print at the bottom of the page comes clean: "Concept Chevy Volt shown. Not available for sale."

The Volt was officially unveiled in January 02007 at the Detroit Auto Show, and since then, despite remaining more idea than reality, has been plugged, every which way but literally, around the world...

The Chevy Volt is still at least three years away from start of production and a good four to six months from real running prototypes. However none of that is slowing down General Motors from using the car to charge up its image.

[B]anners and billboards are turning up in high-visibility locations. [...] Many magazines over the last six months have also featured the image of the range-extended EV and now there is a TV ad as well.

(Quote and ad from "Three years before Job 1 and GM is already advertising the Volt", Autoblog Green, 13 September 02007.)

Here's what the Vehicle Line Director for the Volt, Tony Posawatz, says about it at the Chevrolet website:

Although we haven't said exactly when the Chevy Volt will come to market, we've set our internal targets to complete the vehicle by the end of 2010. The specific date depends on the results of rigorous battery testing that's going on right now.

Now, I don't own a car, although I do occasionally drive borrowed or hired vehicles: the expenses, hassles of traffic and parking, and (not least) environmental problems all associated with car ownership -- particularly in Hawaii -- have so far provided an overwhelming deterrent. So, I don't typically pay much attention to developments in automotive technology. However, that enormous industry's response to American society's comparatively sudden awakening to concerns of fuel sustainability and the like is too striking to go unnoticed, even by me.

I recently saw the 02006 documentary Who Killed the Electric Car?, a sort of policy whodunit about the mysterious fate of General Motors' EV1 which briefly flowered in the 01990s, before being withdrawn amid a cloud of suspicions and a flurry of angrily pointed fingers. Among the elements that make a strong impression in that film is the existence of a very committed core of car buyers who want to see automotive technology go green, and the success of the Toyota Prius has no doubt helped auto manufacturers to take this market segment much more seriously. The Volt has a sort of fansite (operated by a full-time physician who claims no affiliation with General Motors), which aims "to help make sure it does arrive!"

While the circulation of images and ideas about greener vehicles, similarly to the abundance of ideas about Greener Gadgets, is encouraging from a certain limited point of view, it leaves unscathed the underlying patterns and passions of consumption which arguably drive the gravest threats to our collective well-being. Still, I certainly join others in wishing great success to GM's hard-working battery of battery testers.

Meanwhile I find it a curious and fascinating strategy to advertise a concept car years ahead of its actual availability. I suppose in this case it's a long-term -- and I use that phrase without irony in this context -- branding strategy, as no one wants to be left behind if the vehicle market continues to migrate towards "greener" versions of existing products.

* These folks appear not to have heard about bicycles.
Posted by Stuart Candy at 4:55 am

And if you want to buy into the who killed the electric car thinking, "futures artifacts" such as this one buy the company more time, so to speak, to extract every drop of value out of the fossil fuel economy while promoting itself (and earning social capital) as environmentally conscious. I find this particular type of advertising by the automobile companies as disingenuous and odious -- and not at all like the type of futures thinking that you and your colleagues are responsible for.

Thanks, Sean. I agree. Our interest is in diversifying the field of the imaginable, to enable the elaboration and pursuit of preferred alternatives. The car companies' aim here seems to be to pave the way (so to speak) for more of the same behaviour that got us into this mess.

Not surprisingly, though, whatever these differences at the level of purpose, their skilful manipulation of public conceptions of what's possible, probable and preferable does put to use some powerful communicative tools.

Selling us on a virtual product is one such tool. The Volt need only exist as a concept and a promise in order to re-engineer, to some extent, perceptions of the viability of car culture.

Other examples of companies, or other entities, marketing themselves on the premise of ostensibly imminent change?

I picture an alcoholic carrying around the suit and tie that he's going to wear to that job interview next week.