Fatigue, irritability, and much, much more!

Since the Nissan old suit, I've been curious about other wearable simulators. Check this out... 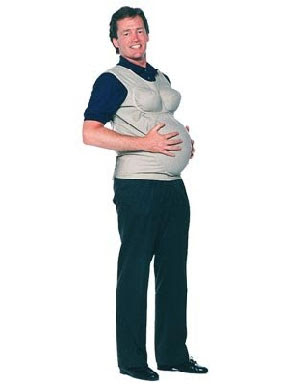 "The Empathy Belly"® Pregnancy Simulator lets you know what it feels like to be pregnant! It is a multi-component, weighted "garment" that will -- through medically accurate simulation -- enable men, women, teenage girls and boys to experience over 20 symptoms and effects of pregnancy, including:

"I wish you were pregnant for a day," she said. "Just to feel what it’s like!"

Millions of women have expressed similar fantasies to their husbands and boyfriends, which explains the ongoing success of "The Empathy Belly" pregnancy simulator.
[...]
As an educational tool, the Empathy Belly has numerous applications.

Hollywood uses it to train actresses preparing for pregnant roles, although the suits are too cumbersome to wear during actual scenes.

Ford Motor Co. engineers have worn them to design more pregnant-friendly cars, and sociologists have used them to study attitudes about pregnancy in the workplace.

Hospitals use the belly to give expecting fathers a taste of the physical and psychological impact of pregnancy. And it is also widely used with teenage boys and girls to encourage celibacy (or birth control).

The simulator is meant to be worn for only 30 minutes. In order to wear it for more than three hours in an unsupervised environment, I had to sign multiple health waivers.
[...]
My wife squeezes my fake body parts and is amused to see me walk like Baby Huey, the oversized cartoon duck. Mission accomplished. But she also notes I am not experiencing any heartburn (her archnemesis) or water retention in my legs and ankles. She’s absolutely correct, but a suit like this could never 100 percent duplicate her experience.
[...]
Overall, simulated motherhood wasn’t too much of an ordeal until the evening, when Stacy convinced me to sleep in the suit for "the full experience." I took her advice and grabbed a couch cushion to use as a body pillow. Resting on my back for the first time, it felt like a rhino was stomping on my stomach in hiking boots.

I spent the entire night shifting between three different positions: laying on my right or left sides and propped up sitting against the couch cushion. Each time I switched positions, I felt the rhino’s boots kick in again. And I asked myself: How do pregnant women get any serious sleep?

Garnick's 24 hours of simulated pregnancy earned him a measure of notoriety. Other men have since taken up the challenge, for instance, the hosts of Internet TV show Dadlabs; "An edgy, fun and Informative show for dads and the women who tolerate and/or love them".

Meanwhile, the same company can also outfit you to get a feel for the adverse health effects of heavy smoking, with "The Empathy Lungs"™ C.O.P.D. Simulator -- C.O.P.D. stands for "Chronic Obstructive Pulmonary Disease (which is comprised primarily of Emphysema and/or Chronic Bronchitis), as well as Asthma and Lung Cancer."

Although like all infomercials it verges on self-parody, to me this really is a fascinating intervention. A couple of observations made during the video by Empathy Lungs co-inventor Linda Ware:

Both I, and the professionals I interviewed, all agreed on one fact: that whatever wrongdoing or self-destructive behaviour people are engaged in, be it smoking, drinking too much, overeating until they're obese etc, people are experts at rationalising and staying in denial about how much harm they are causing themselves.
[...]
Given this pervasive denial of smokers, and knowing as an educator that experience is a much more persuasive teacher than just words, I set out to develop a device that would simulate the experience of C.O.P.D. to let smokers get a sneak preview of the probable future if they kept smoking.
[...]
The Empathy Lungs is a multi-component garment, put on only by a professional in the medical, educational, or social service fields. It is designed to be worn once by each person, for as little as ten minutes, in an office or classroom setting. In a medically accurate manner, the Empathy Lungs realistically simulates ten of the physical and emotional symptoms of C.O.P.D.
[...]
The exciting thing about the Empathy Lungs is that, since it gives people an experience that is tangible, here-and-now, visceral and emotional, it gets past the wall of denial. You put it on someone, and suddenly they feel debilitated, handicapped, and sick. Then, even after just ten minutes, you take it off of them, and they are elated that the C.O.P.D. wasn't real -- this time.

The Empathy Belly and Empathy Lungs each simulate physiological states that in some cases represent genuine future possibilities for the wearer, and in other cases might be used by parties seeking a more empathic (Greek: empatheia "passion", from en- "in" + pathos "feeling") comprehension of the lives of others -- for instance, the belly for fathers-to-be; the lungs for families of elderly smokers. In relation to the pregnancy simulator, the verisimilitude of the suit may be less important than the heuristic value of encountering the "shape" of the experience, so to speak; not to mention the social importance of simply being willing to try it on. This certainly seems to be the case with the men who wore the belly in public -- both Garnick's article and the Dadlabs show emphasise, if light heartedly, the extremely positive response from women to their daring.

Both these outfits prompt me to spend more time considering the values and limitations of "embodied foresight" generally. For me, the specific bodily states (old age, pregnancy, ill health) stand as examples of a "wearable" approach of thinking and feeling ahead, which can also be accomplished by other kinds of intervention. Simulated and vicarious experiences of possible futures range from thought experiments, to films, to participatory exercises and games, through to -- some day soon -- direct neural interface; all these and more can be located on a continuum of foresight (or rather foresense) activities.

Now, the particular uses that existing simulation suits may be put to are bound to vary, of course, and I'm less enthused by some than others. For instance, I'm not especially keen on the Empathy Belly being used to scare teenagers into not having sex. Then again, maybe ten minutes in a "harrassed parent of a pregnant teenager" suit would change my mind.
Posted by Stuart Candy at 4:34 pm