The line between thought-provoking artifacts from the future and actual technological developments sometimes becomes oddly blurred -- as noted, for instance, last month in a comment to this post, in relation to bionic contact lenses.

Bruce Sterling at Beyond the Beyond (31 March, 02008) enthusiastically points out this cool entry from a recent design competition, Greener Gadgets... 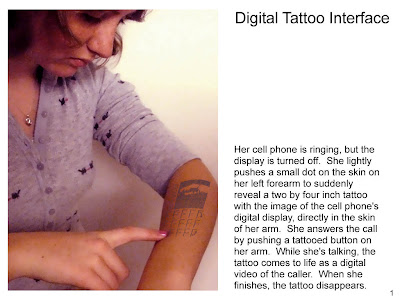 The competition was co-organised by design blog Inhabitat, and sustainability consultancy Mark Alt + Partners, in cooperation with longstanding (since 01995) online magazine of industrial design, Core77. The comp launched on 26 December 02007, and culminated on 1 February at a conference in New York City. The design brief was as follows:

Core77 is inviting designers to explore the concept of "Greener Gadgets." Designs should seek to minimize the environmental impact of consumer electronic devices at any stage in the product lifecycle. Areas of sustainability to consider include:

Participants are encouraged to consider their designs as part of the entire product ecosystem, and should think as holistically as possible. Designers may choose to focus their entries on a particular area of human enterprise (learning, playing, communicating, etc.), or a particular context (work, home, school, etc.), a particular material, or a specific device. Entries may also seek to create new paradigms for products and services.

Ultimately, we are looking for "great gadgets" of the greener kind.

As it happens, the first prize winner, EnerJar, an energy monitoring device, was among "not 'products' that can be purchased — but [...] a handy, downloadable DIY design that can be put together using a jam jar and other household objects." 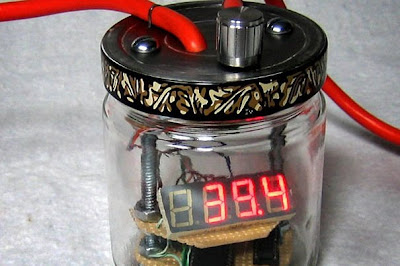 Many of the other top entries selected, however, were not much beyond illustrated ideas. For example, the "Gravia" Gravity Based Kinetic Energy Lamp, second place getter, was described at the Inhabitat blog as "a fantastic concept - but one that has stirred up some debate across the blogosphere recently in regards to whether or not it is possible to build such a lamp right now with the technology that exists today." 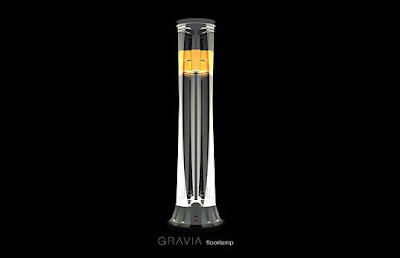 Interesting, I think, that the comp's organisers used no categories differentiating the already here, from the near, from the way out. As a result, the entries range from witty branding ideas, through ambient reminders of environmental impact, to fully-blown sci-fi invention.

(Click through to Notable entries page for the sources of these selected images...) 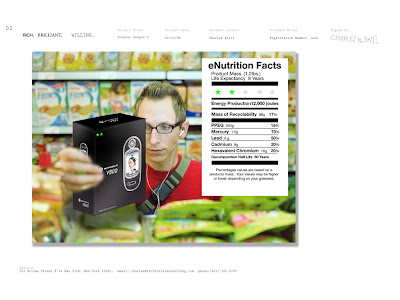 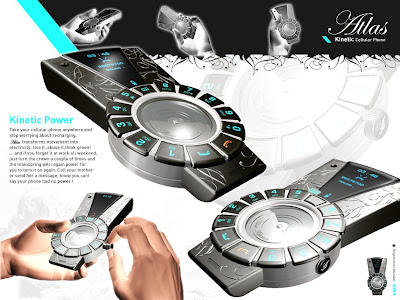 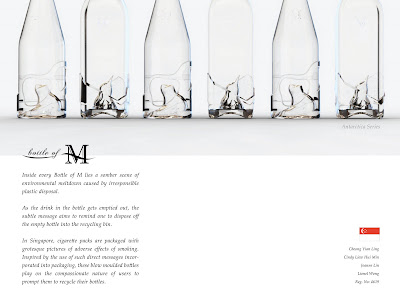 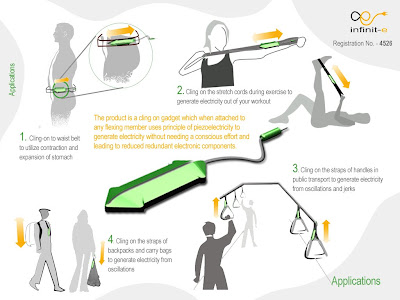 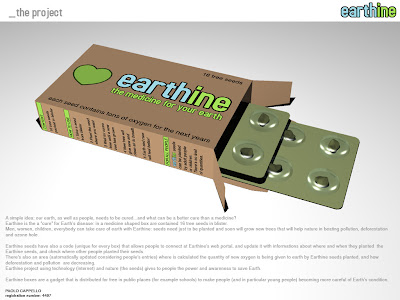 (I'm reminded of the Forum for the Future's "Low Carbon Living" images, which spring from a comparable aspiration to think greener.)

The reality-fantasy spectrum collapses here, in a way I find quite delightful, I should add, juxtaposing products that seem immediately feasible at one end, through to ambiguously futuristic -- and perhaps impossible -- "design fiction" (Sterling's useful term) at the other.

Which is to say that, for most of the successful entries, this competition essentially comprised an ideational exercise. The stated evaluation criteria were: innovation, clarity of design, originality, form and presentation. I hope I can be forgiven for supposing (at first) that a "greener gadgets" design competition would involve submitting a feasibility statement, if not a functioning prototype. But as it turns out, entries required only three jpg images, telling the product's "story" at different levels (context, object, and details), plus a 500-word project description.

Now, I mention this not as a criticism, but simply as an observation which, may point to some implications for how we apprehend and experience technological (and, hot on its heels, social) change.

With increasing numbers of people turning increasingly sophisticated (CG-enabled) design ideas loose in the mediascape, in some settings, the virtual (or hypothetical, or future) artifact and the real one have become exceedingly difficult to tell apart. Playful design concepts like the iRing (below) seem to appear more and more often in my meanderings around the web. Real or not? At a glance, there's no way to tell.

iRing | Design by Victor Soto | via Geekologie, 22 January 02008.
Not only are freelance designers engaging in this sort of public domain product development, but consultancies and big brands do too. The Nokia Morph and Adaptive Path's Charmr device are both examples recently blogged here.

A weird upshot of all this simultaneous availability of vividly imagined "future" products, in a context where rapid change has been normalised, is the subliminal (and occasionally, outright) confusion it can generate. When it comes to gadgetry, to someone without inside information, there can be a very blurry line between idea, concept, prototype, and fait accompli. Unless you pay close attention to what's happening at the cutting edge of technology -- and, to be fair, most people have enough other things going on in their lives that they don't -- it's pretty easy to mistake a hypothetical product for a real one. (The reverse is probably also true.)

For instance, a viral video temporarily set (certain excitable portions of) the geek community alight in February, because it appeared to herald the imminent arrival of an exciting new Ultra-Mobile PC (UMPC) from Samsung, the Korean electronics giant:

Tech news sites hastened to correct the misperception. In point of fact, the video had been produced by a college student in India for a class project.

We've been getting tipped all morning on a supposed Samsung P9 UMPC. Sorry Charlie, it's not the P9. It's not even from Samsung. As sleek and sexy as this crazy, detachable slider is, no amount of wishful thinking is going to make it more than a university design project.

This ambiguity seems especially apt to occur with images (still or video) of stand-alone gadgets -- as opposed to their social or user contexts which may contain many more "moving parts", literally and figuratively. I'm referring here to the difference between depictions of gadgets themselves, and the evocation of how they change (or are changed by) their social context. As much as I rejoice in what seems to be increasing availability of ingenious possibilities, fodder for our collective imagining, compellingly and realistically portrayed -- especially when imbued with this "bright green" sensibility -- I have to say there seem to be a lot more of the former than the latter floating around.

The tendency to focus on technology itself is understandable: it's a complexity-reducing strategy for thinking about change that also plays well with our object-focused, consumption-driven economy. But "stuff" is not, I think, the true stuff of experience. Picking up on an trend noted by Allison Arieff (quoted in this recent post), I'd expect that over the coming years, the increasingly holistic, integrative, values-oriented efforts of designers -- particularly those concerned with user experience and interaction design -- will result in deeper engagement with evoking what change feels like, not just how its putative protagonist-objects look; as well as how it might occur, connecting outwardly, in complex contexts such as communities and families, as well as inwardly, addressing our interior or emotional states.

Product-centric -- and more particularly gadget-centric -- thinking surely affords some insight into the landscape of alternative futures, providing possible fragments of preferred (presumably sustainable, i.e. non-self-destructive) scenarios. But the key word is fragments; whereas the design challenge before us is systemic, complex, multi-dimensional, and massively distributed. No amount of gadgetry, however green, can substitute for addressing futures systemically.
Posted by Stuart Candy at 3:14 am

Great topic & it has covered several points regarding
subliminal messaging technology. It was fun reading your article. You might want to check out http://www.chargedaudio.com as they have a whole range of articles and programs related to subliminal messages.